Aston Martin’s partnership with Red Bull seems to be going well, so well that both companies are now developing not one, not two but four cars together; a collaboration that will extend to 2021, at least. The partnership began with the project AM-RB 001 Valkyrie – the monstrous hybrid hypercar that will enter production in 2019. Aston is also working on a Valkyrie AMR Pro (AM-RB 002), another hybrid hypercar (AM-RB 003) and a Ferrari 488 rival dubbed internally as the AM-RB 004.

But, today, we will be focusing on the AM-RB 003. We first came to know about the hybrid hypercar in March this year. Additionally, we revealed exclusive info about it in July. Now, thanks to a new press release, we have a teaser sketch and few more details about the new model.

While the teaser itself doesn’t say much about the car’s design, we know thanks to Andy Palmer’s earlier comments that the car will “draw its visual identity from the Valkyrie”. Moreover, Aston has cleared up on what purpose the new hybrid hypercar is meant to serve in the presence of the Valkyrie. Well, Aston says that the Project ‘003’ is being designed and engineered to offer more practical concessions to road use, something the Valkyrie is strictly devoid of. Those practical concessions include more space for luggage among other things. The “brother of the Valkyrie” as it is internally known will be fully homologated for both left and right-hand drive markets. While the Valkyrie is priced at $3.2 million and is limited to only 150 units, the production run of the ‘003’ is capped at 500 units each going for around $1 million. 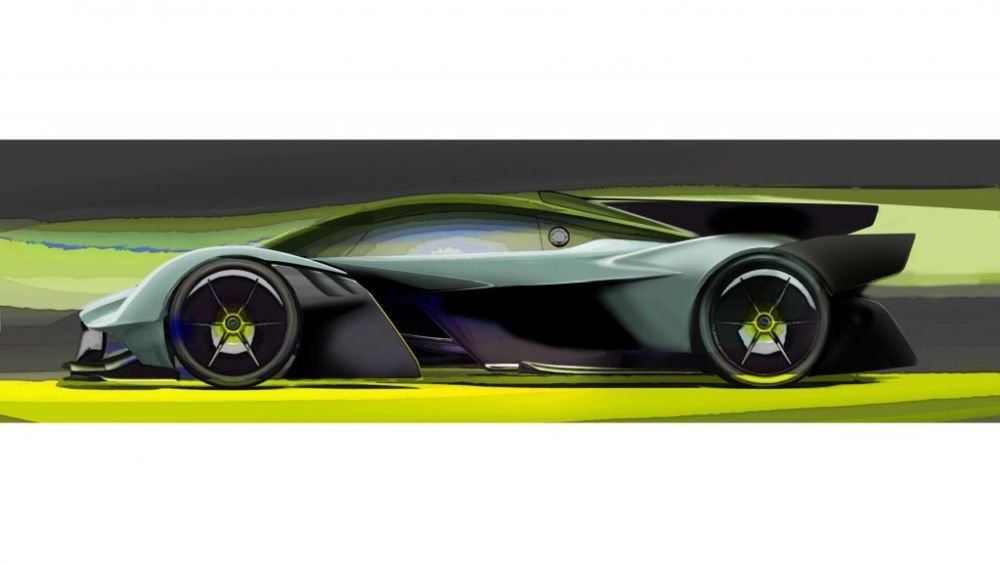 The focus on practicality does not mean that the car will compromise on performance though. The car will be built around a lightweight structure and powered by a turbocharged petrol-electric hybrid engine. While Aston hasn’t revealed what kind of hybrid powertrain the car will utilize, we have exclusive information that it is likely to combine a twin-turbo V6 with multiple electric motors both on the front and rear axles, making it all-wheel drive. Aston says that the car will possess class leading dynamics on both road and track provided by advanced active aero and active suspension systems.

“It was always the intention for the Aston Martin Valkyrie to be a once-in-a-lifetime project, however it was also vital to us that the Valkyrie would create a legacy: a direct descendant that would also set new standards within its own area of the hypercar market, creating a bloodline of highly specialized, limited production machines that can exist in parallel with Aston Martin’s series production models. I’m thrilled to announce that this car is the Project ‘003’, and our next step into a dynamic and exacting arena,” says Andy Palmer, Aston Martin Lagonda President, and Group Chief Executive.

While the production will start in late 2021, expect to see the car in pre-production form in late 2019 or early 2020. When it arrives, the AM-RB 003 should compete with the successors to the Ferrari LaFerrari and McLaren P1 both of which are supposed to arrive with hybrid powertrains early next decade.