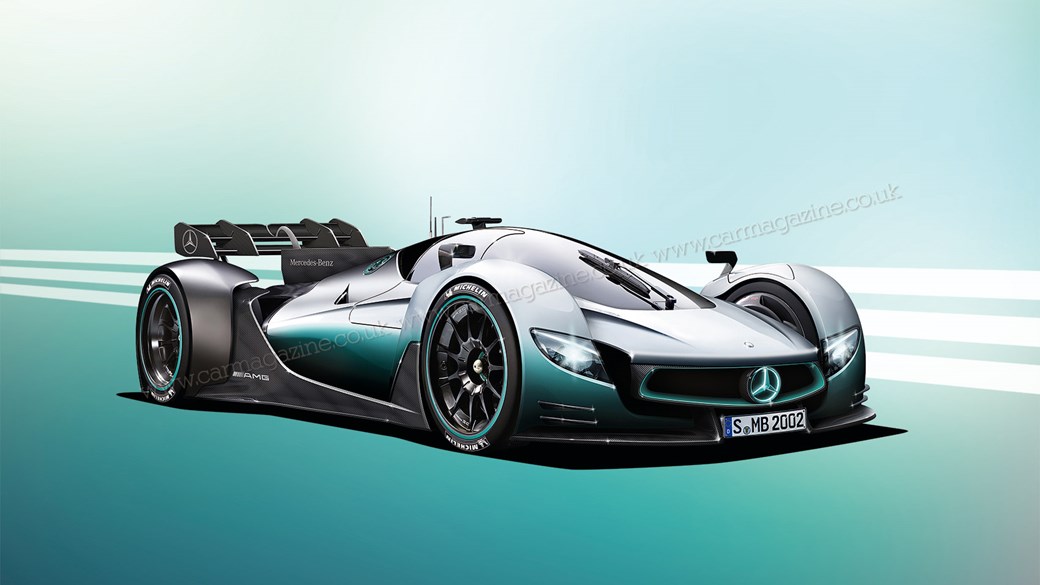 Tobias Moers of Mercedes-Benz was speaking with journalists on the sidelines of the 2016 Los Angeles Auto Show. Moers reiterated that the upcoming Mercedes-AMG R50 hypercar will be launched in 2018.

He confirmed that a 1000 hp F1-derived hybrid powertrain will propel the AMG R50. The company plans to built 200-300 units of the hypercar. Furthermore, he denied all prior reports of a 1200 hp engine and alleged collaboration with Lotus.

The Mercedes-AMG R50 hypercar will be showcased at the 2017 Paris Motor Show. Keep watching this space for more updates.

Meanwhile, McLaren revealed its plans to ressurect the McLaren F1. The McLaren Hyper GT codenamed BP23 is set to replace the F1. Follow the link to read more about the upcoming McLaren hypercar.

If you were praying for Mercedes-AMG to build the rumored R50 hypercar, then your prayers have been answered. Mercedes-AMG has confirmed the R50 hypercar at the 2016 Paris Motor Show, as was expected.

“I am very excited to officially confirm: our next big thing at AMG is already in the pipeline,” said Thomas Weber- head of research and development. “We are going to create an AMG performance hybrid featuring our Formula 1 drivetrain technology. Under the lead of AMG, our performance companies will join forces and create the most efficient and, at the same time, the best-performing and most spectacular AMG of all time; some might even call it a hypercar.

“But no matter what you call it, it will definitely show how we will take our performance brand into the future with extremely efficient and intelligent drivetrain technology. Of course, there will be no compromises in terms of the emotional appeal of this car.”

Checkout the first official sketch of the upcoming hypercar.

The Mercedes-AMG R50 hypercar is set to be a “street-legal F1 car” packing a lot of Formula 1 technology derived from the cars Lewis Hamilton and Nicro Rosberg are racing this year.

Its launch will mark AMG 50th anniversary and what a way to celebrate! Powering this lightweight hypercar will be a puny 4-cylinder engine, albeit with an extremely high specific output. Assisted by electric motors, the aim to achieve a power-to-weight ratio of 1 kg per 1 hp.

Moreover, the Mercedes-AMG R50 hypercar will be a technological showcase and is unlikely to go into series production. That said, there have been reports of AMG getting in touch with potential buyers for their insane creation. The concept is expected to be revealed at the 2017 Frankfurt Motor Show. So keep watching this space. Also, read on to find out more about the AMG R50.

Mercedes-AMG R50 hypercar is all set to take on the RedBull-Aston Martin AM-RB001 supercar. It’s built around a similar concept of lightweight, high-downforce and aesthetically resembling a LeMans 24 Hour prototype race car.

Some new details have emerged since we last updated this post. Mercedes-AMG’s AM-RB001 rival will be built around a carbon fiber monocoque weighing around 1300 kg (2900 lb). The engine is being developed by Mercedes AMG High Performance Powertrains. It is an F1-derived 2.0-liter turbocharged 4-cylinder unit producing around 1000 hp. The Mercedes-AMG R50 will use two-electric motors on its front axle and a third bolted straight to the transmission. It features a fully variable active suspension, all-wheel drive with torque vectoring and rear-axle steering.

The AMG R50 hypercar will be like a road-legal race car. The driver’s seat sits low the ground and will be fixed in place. Instead, the pedal box and steering will retract to a comfortable position. The seats will be lined by an inflatable material to accommodate drivers of all sizes. The cabin will also feature a futuristic heads-up display instead of a conventional gauge cluster.

The AMG R50 will be able to attack corners and pull high Gs like an F1 car. To keep it planted to the road, the AMG R50 uses active aerodynamics. Adjustable front flaps, ground-effect floorpan design, multi-functional rear spoiler, downforce enhancing air-blades on either side and an air-brake makes up most of the aero package.

For now, the Mercedes-AMG R50 has been signed off as a one-off concept which will debut at the 2016 Paris Motor Show. That said, a limited production run of 25-250 units seems quite plausible.

For more on the Mercedes-AMG R50 hypercar keep watching this space.

Good folks at Top Gear have been speaking to an insider about the upcoming Mercedes-AMG R50 hypercar. According to their source, “it’s definitely happening.”  The R50 will be built around a carbon fiber monocoque and will feature the brand’s iconic gull wing doors.

Mercedes-AMG are aiming to achieve the magical power-to-weight ratio of one-to-one. This would require a potent engine which apparently would be derived from the current Mercedes-AMG Petronas F1 car. Now, Lewis Hamilton’s race car makes around 700 hp from a turbocharged V6. The R50 hypercar will get a larger capacity engine coupled with three electric motors thrown in for good measure. It does seem like peak output of 1000 hp will be achievable.

In 2016, Formula 1 cars are running 1.5-liter units. The R50 could use a 2.0-liter version of AMG’s powerplant. Meanwhile, that’s not the only car Mercedes-AMG have been working on. The company recently showcased the Maybach 6 concept at Pebble Beach.

Mercedes-AMG is working on a new hypercar, code-named Mercedes-AMG R50. According to Autobild, the new halo car will be built to commemorate AMG’s 50th Anniversary next year.

For now, they are closely guarding the details of the R50 hypercar but we can expect to get more information by the end of this year. Meanwhile, some are speculating that the Mercedes-AMG R50 will use a hybrid powertrain consisting of two electric motors and a mid-mounted petrol engine.

Moreover, it is believed that the 2.0-liter turbocharged engine alone will be good for a 1000 hp with the electric motors contributing an additional 300 hp. That’s a lot of horsepower from such a small unit. It will be built primarily out of carbon fiber. A two-seat carbon fiber monocoque will provide the backbone. The R50 is expected to weigh around 1300 kg or even less than that.

Like the recently revealed Aston Martin AM-RB001, the Mercedes-AMG R50 will be designed along the lines of a Le Mans prototype racer with cues borrowed from the CLK GTR. Rear-wheel steering will also be a feature as would be adaptive suspension.

The Mercedes-AMG R50 hypercar is expected to cost upwards of $2.0 million. There’s a lot of action happening in this segment of the market lately. McLaren is rumored to be working on a replacement for the F1 and things are only going to get more interesting.