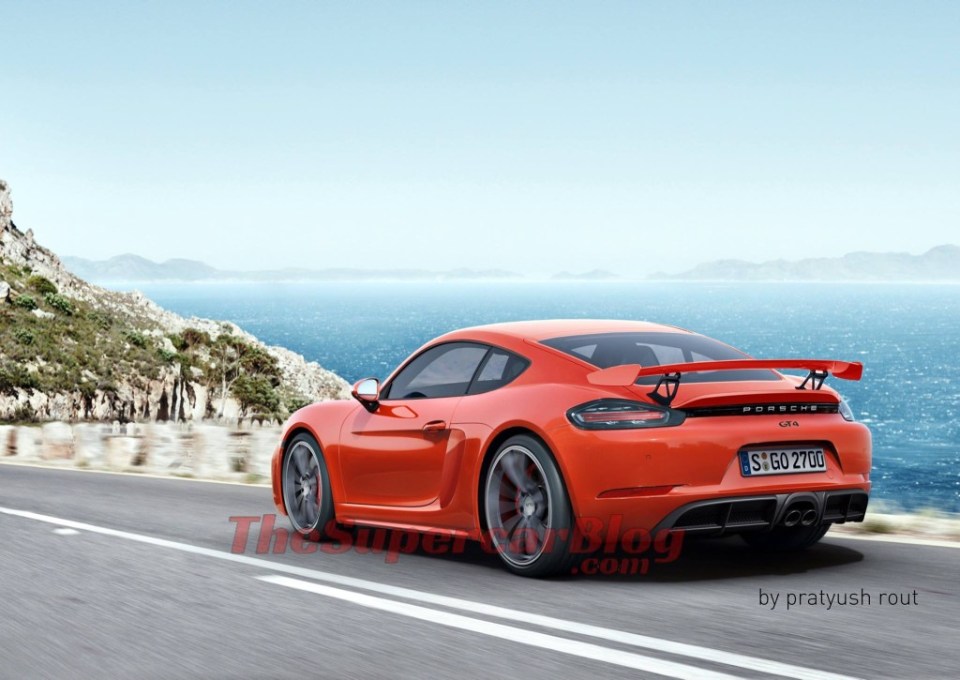 The Porsche 718 Cayman range uses a new 4-cylinder turbocharged engine. But, the 718 Cayman GT4 will get a naturally aspirated flat-6 instead. That’s great news, especially since there have been mixed reviews of the turbo-4 engine. Although, it has great low-end torque, it doesn’t make an exciting sound as you drive along.

Porsche has just revealed the 718 Boxster and 718 Boxster S. This got us excited about the future Cayman GT4 and we can be sure it will be one brilliant little sports car.

Following the 718 Boxster reveal our talented digital artist rushed to his desk and came up with a rendering of a future Porsche that you and I would be more interested in. Here is a our artists rendering of the next-gen Porsche 718 Cayman GT4.

The 718 Boxster and Boxster S have swapped their naturally aspirated flat-six engines for a more modest 4-cylinder units with added garnish from a turbocharger. So, the size of the engine has gone down but output figures are up thanks to forced induction.

Here are some specs.

The 2.0-liter turbocharged flat-4 engine in the 718 Boxster is good for 300 hp while the 2.5-liter unit in the Boxster S makes 350 hp- that’s 35 hp more than the 6-cylinder engine from the previous generation Boxster. Similarly, the hard top 718 Cayman could also feature the same 2.5-liter powerplant.

While there is no talk about a next-gen Porsche 718 Cayman GT4 yet, we are sure there are plans already in place for it, especially after the success of the first ever Cayman GT4, Porsche’s GT division would be itching to get their hands on the new one.