But, what if you could build a road going car on top of a Formula one winning powertrain? Welcome to the Mercedes-AMG Project One – Built to celebrate the 50th anniversary of AMG, the Project One is Mercedes’ answer to Adrian Newey’s Aston Martin Valkyrie. 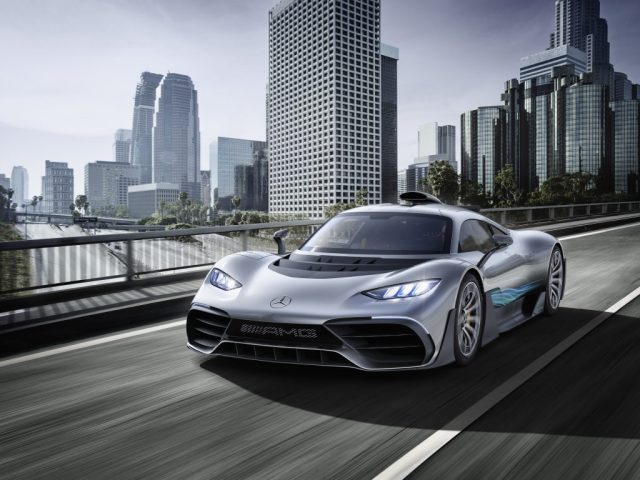 The exterior combines a traditional hypercar silhouette (like that of a CLK GTR and Porsche 911 GT1) and modern technological elements with extreme aero trickery going on everywhere.

The hypercar does away with traditional AMG design, instead we have smoother aesthetics. A big Mercedes-Benz star adorns the bonnet and AMG carved on to the grill beneath it. A pop-up rear wing integrates an air-brake. It works in tandem with the retractable front wheel-arch extractors to reduce drag and increase downforce. 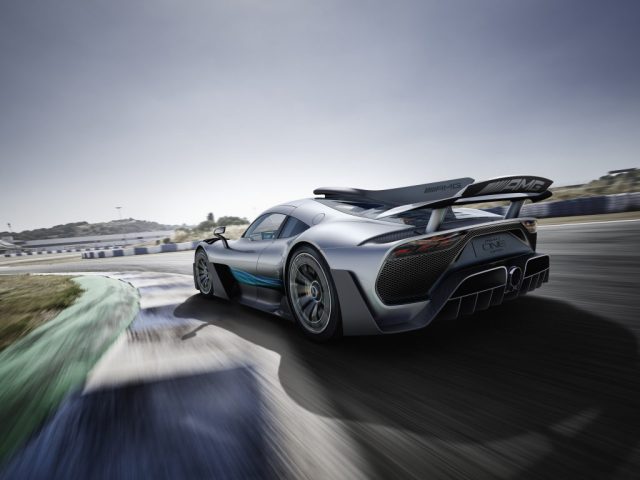 The car runs on 285/35 ZR19 Michelin Pilot sport cup 2 tyres at the front and 335/30  ZR20 ones at the back. The wheels are 10-spoke forged aluminium with center-lock, that are exclusively reserved for the Mercedes-AMG Project One. The wheels have a radial carbon-fibre semi-cover which improves the car’s aerodynamics by optimizing the airflow around the wheels.

But the most prominent exterior feature is the large air intake on the roof that extends back into a shark fin, with two NACA ducts on either side. There is also the Formula 1-style single exhaust outlet with two tiny wastegate outlets below. The exhaust sits between a two section diffuser at the rear. 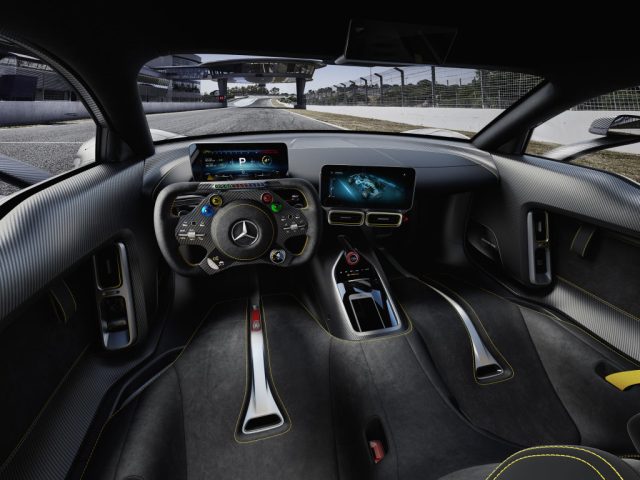 As evident, the interior is reduced to the bare essentials but is visually fascinating at the same time. The seats are mounted to the monocoque just like the Aston Martin Valkyrie and the new Ford GT. Instead, you can adjust the steering wheel and pedals for a track ready driving position. Everything inside the car, even the two 10 inch displays are made with weight optimized metal components.

The flattened steering wheel with LED shift indicators looks to be borrowed directly from Lewis Hamilton’s F1 car. We were expecting Mercedes to offer gullwing-style doors on the Project One, instead it gets butterfly doors. 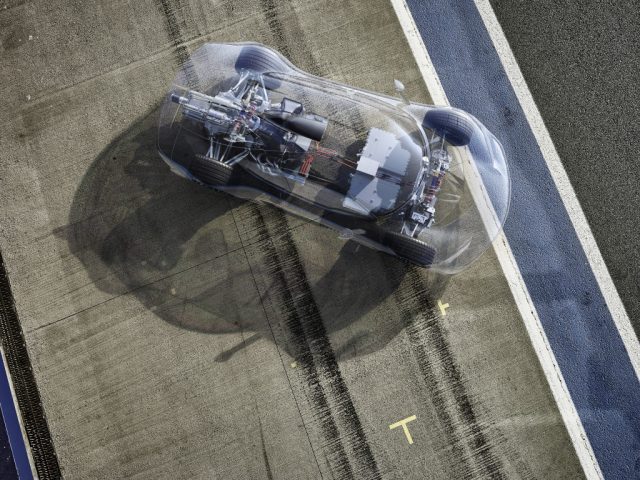 The 1.6-litre V6 hybrid petrol engine with direct injection and electrically assisted single turbocharging comes directly from the Mercedes-AMG Petronas Formula 1 racing car.  The hybrid setup incorporates four electric motors – one has been integrated into the turbocharger, another has been installed directly on the combustion engine with a link to the crankcase. The remaining two motors drive the front wheels.

The engine, which is mounted ahead of the rear axle can clock up to 11,000 rpm – a little dialed down from Lewis Hamilton’s F1 car’s 15000 revs for usability reasons and also for the car to be able to run on normal supercar gasoline and you don’t have to go to Mercedes Petronas Formula 1 team to get your racing fuel. The electric motors themselves can reach up to 50,000 rpm, easily eclipsing even the highest performing motors of today. 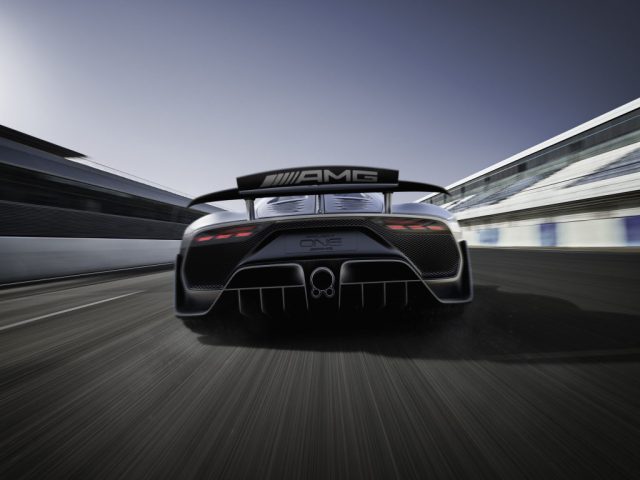 The battery cells and its management and cooling system is the same as the one on the Formula one car and are accommodated in the vehicle floor behind the front axle. The F1 V6 coupled with cleverly incorporated electric motors is incredibly efficient on both performance and thermal benchmarks. In fact, the setup doesn’t just eliminate the turbo lag, but has response times even shorter than that of a naturally aspirated V8.

Power is transferred to the rear wheels via an 8-speed manual transmission that has been entirely developed from scratch for the Mercedes-AMG Project One. It is activated hydraulically and can be operated in automated mode or manually using the shift paddles on the Formula 1 style steering wheel. One thing to note is that AMG engineers are still fine tuning the powertrain and the total output of the powertrain is still unknown. That said, it is claimed to be more than 1000 horsepower. 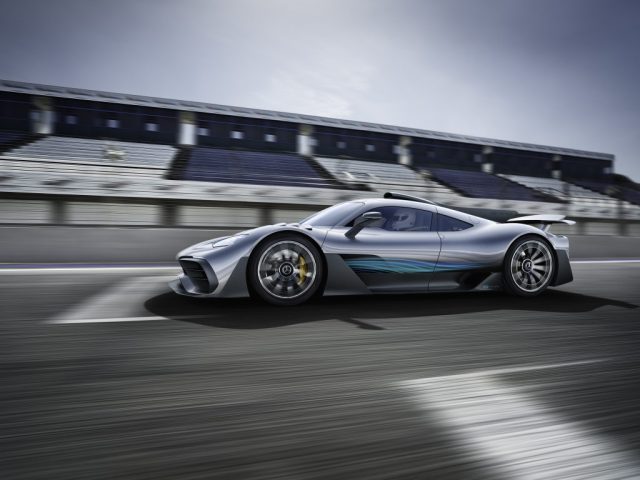 The top speed will eclipse the 350 km/h (218 mph) mark, easily. While there is no word on 0-100 numbers but Mercedes claims the car will go from 0-200 km/h in less than 6 sec – that’s 0.5 sec faster than a Bugatti Chiron. Since, there are two independent electric motors on the front wheels, the Project one will be able to run on electric front wheel drive for up to 25 km (15.5 miles). Whatever the final numbers are, we can’t wait to see the car annihilating lap times on Formula one circuits. A Nurburgring lap record seems inevitable.

During the media briefing, Mercedes categorically mentioned it to be a show car since engineers at Mercedes-AMG and their motorsport division are still working to fine tune the powertrain and aerodynamics.

We might see the final production car at the 2018 Geneva Motor show. With just 275 examples to be made, deliveries start late next year. When launched, the car will compete with the its two other hybrid hypercar rivals – the Aston Martin Valkyrie and Mclaren’s not so track focused BP23 Hyper GT.

Well, it costs around US$2.5 million. 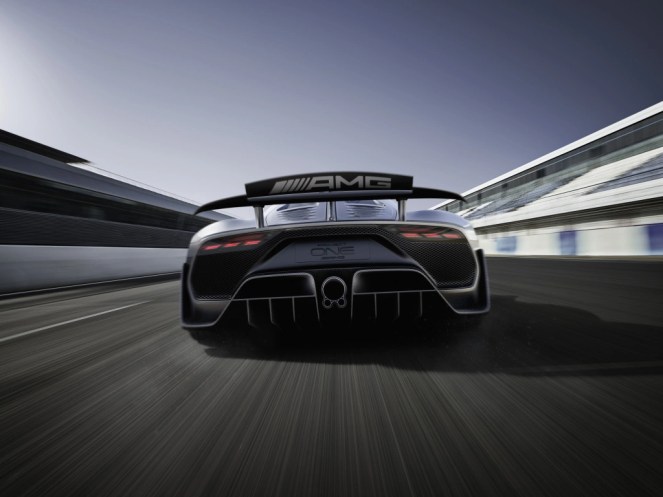 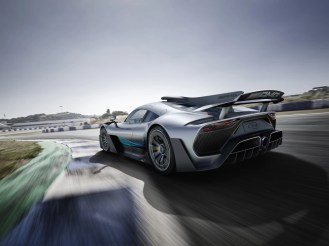 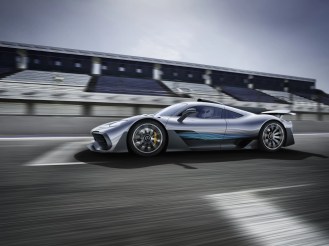 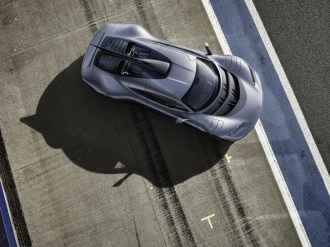 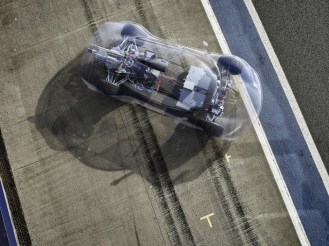 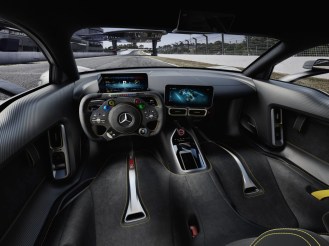 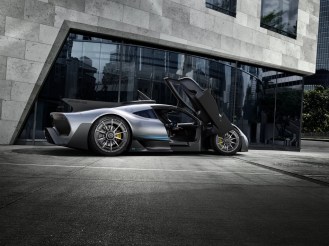 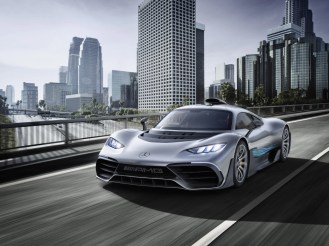 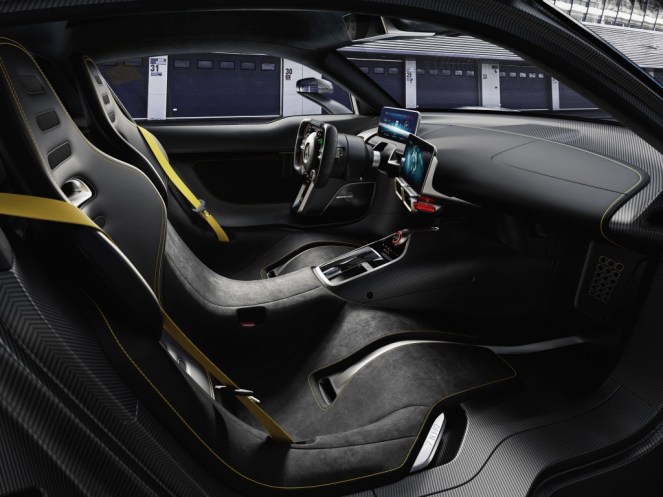 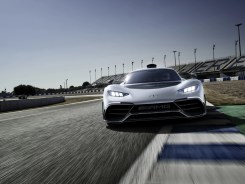 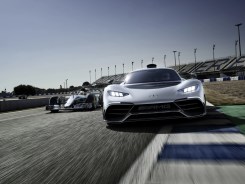 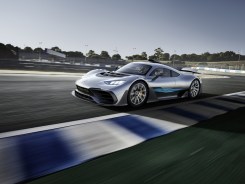 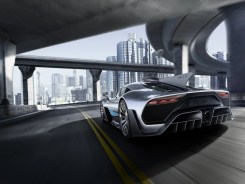