Lotus Evija is a striking new all-electric hypercar and the first from a British manufacturer.

Lightweight construction, downforce and a tonne of power is what the Lotus Evija is all about. The car looks nothing like a Lotus. The low front end has intakes on the hood that channel air over the canopy, while the bi-plane plitter guides air around the wheel wells and into the side vents. Speaking of the side vents, these are like the buttresses on the Ford GT, except even more extreme. The vents open up at the rear forming a tunnel that has LED rings that act as tail lights. The diffuser is equally insane and has a vertical stop light. 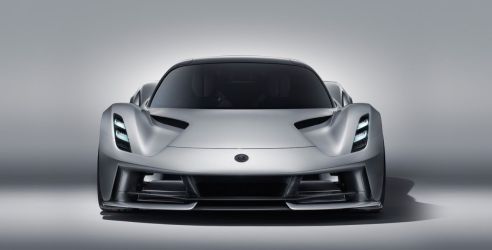 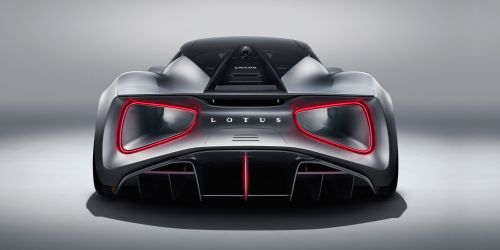 The Evija has an active rear spoiler with an F1-style drag reduction system (DRS). Conventional mirrors have been replaced with cameras that can retract into the bodywork. Inside, the Evija has an exposed carbon monocoque with a floating centre console. It has a small, rectangular steering wheel, a digital instrument cluster and carbon seats. The car weighs just 1680 kg.

The Lotus Evija is said to be the most powerful production road car. It is powered by two electric motors that develop 2000 PS (1973 hp) and 1700 Nm (1254 lb-ft) of torque. It has torque vectoring and comes with five driving modes – Range, City, Tour, Sport and Track. The 2000 kW lithium-ion battery is supplied by Williams Advanced Engineering and is mounted behind the seats. It offers a maximum range of 250 miles (WLTP cycle) and can be recharged to 80% of its capacity in just 12 minutes. Recharging the battery to its full capacity takes 18 minutes. 0-62 mph comes up in under 3 seconds and the car will reach a top speed in excess of 200 mph.

The Evija comes fitted with motorsport-derived suspension with three adaptive spool-valve dampers for each axle. It rides on 20 and 21 inch wheels at the front and rear respectively and has AP Racing carbon ceramic brakes.

The Lotus Evija will be built in Hethel, UK. Production will commence in 2020. Only 130 cars will be produced, each priced from £1.7 million excluding duties and taxes. A production slot can be booked with a £250,000 deposit.