One of the most aggravating things for car enthusiasts is finding a dent in their precious vehicle. While one person might consider a tiny dent no big deal, for someone else, that same dent is enough to shatter their heart.

While car dents are merely aesthetic and don’t cause physical harm to your vehicle, they can be embarrassing for some car owners. Nobody wants other people to look at their car and notice the deep depression on their car’s body. Even worse, every time a car owner looks at their own vehicle, seeing that dent reminds them of the very thing that happened the day they received it.

If you’re tired of that pesky dent lingering on your vehicle, no need to worry. Regardless of how big, small, major, or minor your dent is; how many your vehicle currently has; or how the dent(s) were acquired, there are affordable and fairly quick ways to repair them.

Try one of the following methods to get rid of your car’s dent(s) today and next time, avoid dangerous areas, especially narrow streets with heavy traffic when parking your vehicle. 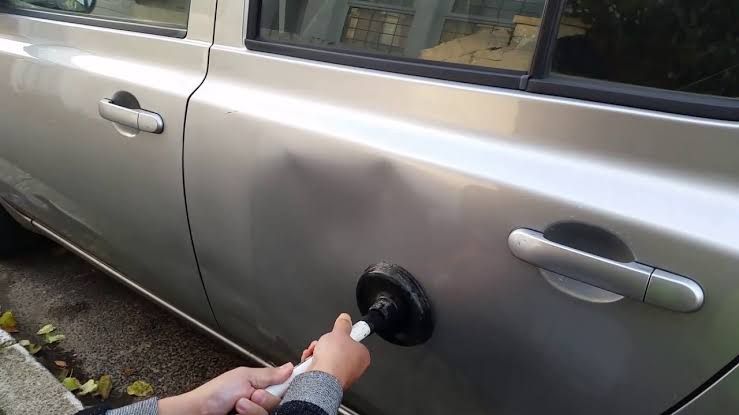 Plungers aren’t just for removing blockages from pipes and drains. Your good ole plunger can also be used to eliminate a small- to medium-sized dimple on the surface of your vehicle. However, for this dent removal method to work, refrain from using a regular toilet or ‘flange’ plumber. Instead, utilize a flat/cup plunger, which is normally used to unclog sinks.

It may sound clique, but using a mallet to hammer the indentation on your vehicle outwards can do the trick. This works well for medium- to large-sized dents. Or if you have a smaller dent, a hammer can serve you well via this dent repair method. Keep in mind, however, that hammering the dent only works if the dent can be easily accessed from behind.

To successfully use a hammer or mallet to get rid of your nasty dent, make sure to first place a cloth over the dent before hammering over it from the inside to prevent the inside of your framework from damage. Likewise, make sure to never hammer too hard or too quickly. Tap carefully from the center of the dent until it eventually pops back out. 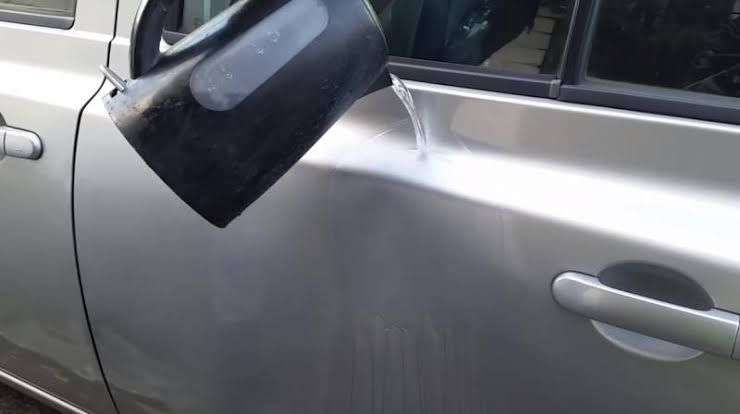 Don’t just limit your use of boiling water for cooking and sanitary purposes. It can also be used to potentially remove unwanted depressions in your vehicle, that is, as long as you have a plastic bumper and are successfully able to access the dent from the backside.

Simply boil water in a teapot, protect yourself from burns with rubber gloves, and have a pot of cold water on hand. Then, pour the hot water from the teapot over the dent. Before it cools down, pop the dent out from the inside. Next, quickly pour the cold water over the area to help it retain its shape and set quicker.

If pouring boiling water isn’t effective, you may have a more successful time holding a saucepan full of hot water over the surface of the dent instead of pouring water over it, before popping the dent out and then pouring the surface with cold water afterward.

Hearing the words “hot glue” and “car” in the same sentence may have you cringing, but the hot glue method definitely works in repairing larger dents dwelling on your vehicle. The hot glue dent removal method is safe to use as it won’t damage your car’s paint job.

Apart from a hot glue gun, you will also need several wooden dowels and a few screws. The larger the dent, the more supplies you will need.

To perform this method, halfway drill a screw into each side of a wooden dowel. The screws embedded in your wooden dowel will later act as a handle. On the wider end of the dowel, place a generous dollop of hot glue on it, and before it dries, place it on the surface of your vehicle near the dent. Continue to add as many dowels to your car as you’ll think you’ll need.

Once all the dowels are placed on your vehicle and dried in place, you can then remove them. Some dowels may need to be removed at the same time depending on the placement of the dent. That said, you may require the helping hands of another individual. Additionally, don’t worry if you need to reapply the dowels again, especially if you have a larger dent.

After the dent is resolved with your wooden dowels, the excess hot glue lingering on your vehicle can be easily removed with heat or rubbing alcohol. 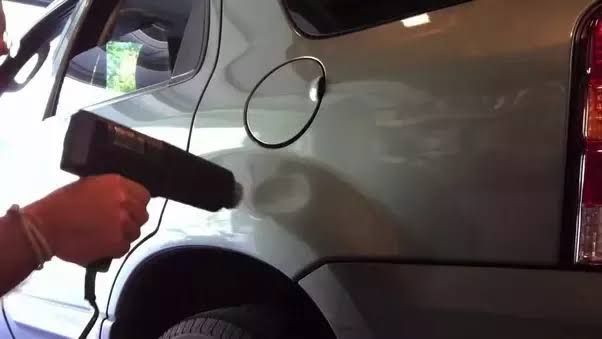 Removing dent from a plastic component on your vehicle is easy with the compressed air and hairdryer technique.

On the hottest setting of your hairdryer, heat up the car dent. Once the region is hot enough and has expanded, turn a can of compressed air upside-down before spraying it over the area. The cold air will then trigger the plastic to contract, reversing the dent if all goes well.

Vacuum cleaners are awesome tools. Not only do they help us clean dust, crumbs, and other debris from the floor and walls, but people also use these tools to find small objects they’ve dropped on the floor. Others may also use their trusty vacuum cleaner as a way to eliminate insects from their homes such as mosquitos, flies, or ants.

Another way your vacuum cleaner can be used? To get rid of dents in your car! With your vacuum cleaner, along with a bucket and some tape, you can create your own DIY dent puller. This method is most successful in repairing hollow dents.

To do this, create a small hole on the bottom of a bucket. Then tape your vacuum nozzle over the hole you just created. The hole you made should be smaller than the mouth of your vacuum to ensure that it’s airtight.

Once you’ve created your vacuum cleaner dent puller, place the nozzle of the vacuum over the dent. If you notice little to no improvement, try to let more air in by wiggling the vacuum nozzle around. 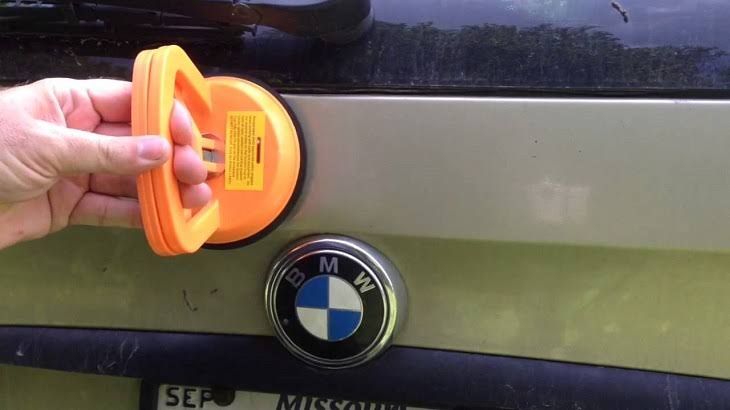 Especially for those who have little experience working with repairing dents, they may be fearful of trying the previous methods, worrying that they will further mess up the body of their car. In that case, buying a special tool designed primarily to remove dents from your vehicle can be a great idea.

There are numerous dent-remover tools on the market from several brands. Before selecting a tool, consider asking an employee which tool they might suggest. It’s also important to read reviews of the tool online to ensure it actually works, is easy to use, and will be effective in removing the type of dent your vehicle has.

The best part of purchasing a dent-removal tool? The affordable cost! It sure beats the price a mechanic would charge you, however, only if the tool ends up being successful in your case.

Did you try the latter methods and have no luck? Or, are you afraid of fixing your dent on your own? In either case, it’s a good idea to just let a professional do the work for you, saving you time, sweat, frustration, and confusion. Those who have experience removing dents from cars know the best, most efficient methods of repairing the toughest of dents without further damage.

Paintless dent repair is a specific type of service that involves repairing small- and medium-sized car dents without damaging the car’s paint job in the process. In the end, not only will you save money from not having to also repair the paint on your vehicle, but your dent will be repaired so flawlessly that nobody will have guessed that your car used to have a dent.

Many technicians have been trained to perform paintless dent repair and have tried such a method on numerous vehicles. With their knowledge and expertise, you won’t have to do the dirty work yourself!

While a minor scratch or tiny patch of chipped paint doesn’t always trigger car lovers, more often than not, dents do. There is nothing attractive about a dent. It doesn’t scream, “Antique” or “Old aesthetic” like some paint scratches or chips. Instead, dents communicate that your car has gone through trauma and not in your usual “aging vehicle” type of way.

The good news is that your dent, even if it’s large and severe, has the potential to be removed. There are numerous DIY methods of removing dents from your vehicle, including using a plunger or even a vacuum cleaner. However, if the latter methods don’t work, getting help from a professional is your best bet.