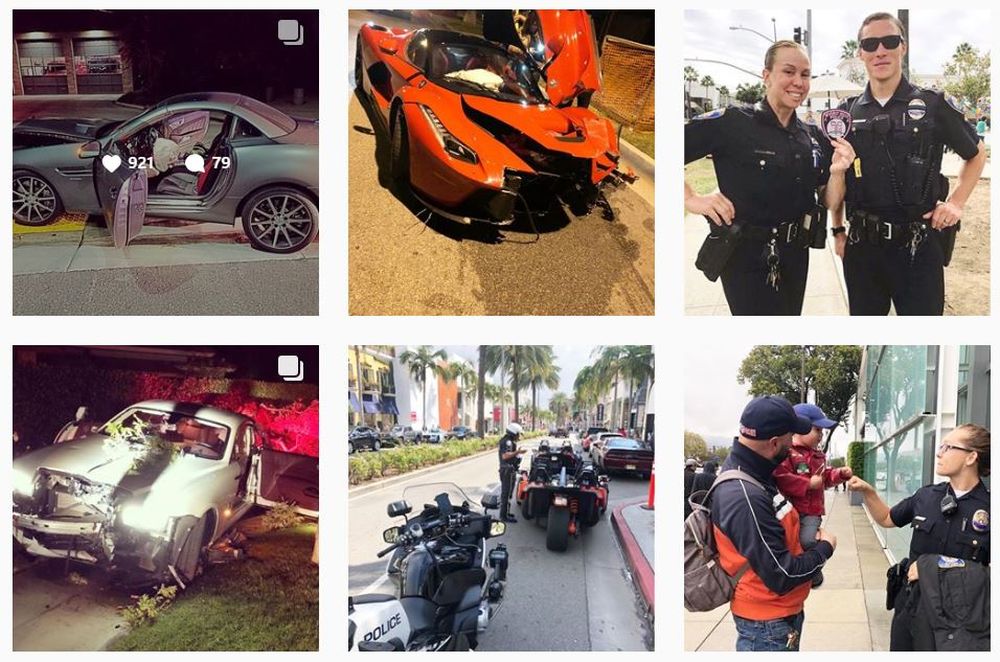 Last month, when a LaFerrari got wrecked in Beverly Hills, California, it was first reported by the city’s police department on its Instagram page. The post had a cheeky caption to go along with it “Ferrari Friday; #speed will put a dent into the weekend fun and the wallet.” But as it turns out, this is just the tip of the iceberg. One look at the police department’s Instagram account, and you will learn that the cops have a thing for roasting bad supercar drivers on a regular basis.

Here’s another Ferrari, a 458 Spider being pulled over by a bicycle officer. The caption includes a multiple choice question, one that has an obvious answer.

Why was the driver of this rented #ferrari 1. Stopped and then 2. Arrested by a BHPD bicycle officer? 🚔⚫️🔵⚫️🚔 A. No license plates B. Possession of drugs C. Failure to install ignition interlock device D. All the above 🚔⚫️🔵⚫️🚔 Let us know your answer in the comments 🇺🇸🚔🇺🇸🚔🇺🇸 #beverlyhills #police #cops #thinblueline #bicycle #license #plate #licenseplate #drugs #rodeodrive #law #traffic #stop #red #car

And another one of those good old “All of the Above questions” this time to address a rental Lamborghini whose driver was filming himself with his smartphone while speeding down a residential street.

Why was this rented #lamborghini stopped and cited? A.) Speed violation B.) Cell Phone violation C.) Filming self while driving D.) All the above ⚫️⚫️🔵🔵⚫️⚫️ Let us know your answer in the comments 🚔🇺🇸🚔🇺🇸🚔 #beverlyhills #police #cops #thinblueline #lambo #bmw #motorcycle #speed #cellphone #selfie #video #sunset #boulevard #tourist #rental #car

This one is from a couple of weeks ago. It is a Rolls Royce Wraith which was wrecked after two thieves took it on a dream ride around Beverly Hills. Apparently, the owner left the keys in the car when it was parked on the street.

Apparently, the BHPD also organizes an annual Cops, Cars and Coffee as a free public event or is it just a parody?

The person who runs the account makes sure to tag the manufacturer, the local dealership and a slew of other related accounts in each photo. Ultimately, it’s quite entertaining to see cops having a little fun at the expense of careless motorists.

Ferrari 812 GTO could be revealed on February 22

VIDEO: Can the McLaren 765LT beat the mighty Senna?