The Devel Sixteen is once again out in the open in a new official video and we got to say this. The “5,000 hp” hypercar is too slow to make a point, even if it has any.

The Devel Sixteen – is it for real or another excellent example of vaporware? The elusive hypercar was first unveiled as a prototype at the 2013 Dubai Motor Show. The last time the public saw the Middle East-built car was at the 2017 episode of the same event. Then it vanished. We saw it online later, being hyped up to the maximum level in social media channels run by Supercar Blondie and Mo Vlogs.

There has been a lot of controversy and discussions surrounding the very integrity of those videos as many industry watchers have claimed that the company behind the Devel Sixteen – Defining Extreme Vehicles Car Industry LLC in the United Arab Emirates – is running paid promotions for its 5,000 hp (we still don’t buy that number) hypercar, with the vloggers conveniently ignoring the jarring flaws and poor build quality of the “million dollar” product. 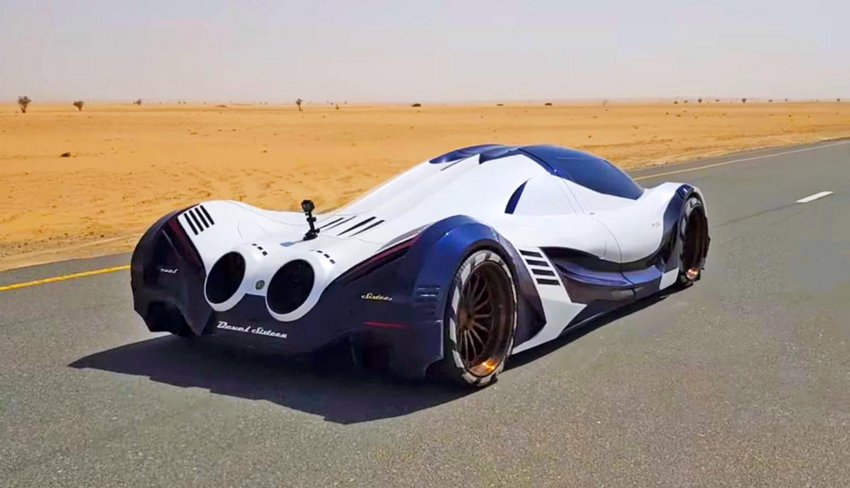 Now, a new video has been uploaded to the official Devel Sixteen YouTube channel. Maybe the company wants to draw some attention towards itself in the wake of the Bugatti Chiron reigniting the 300 mph chatter.

However, this clip shows the Devel Sixteen with its claimed 5,000 hp 12.3-liter V16 driving along an arrow-straight desert road at speeds which are totally unimpressive for a machine that its makers are trumpeting as the most powerful hypercar on the planet. The video has been shot with the level of quality which is dismal even by amateur standards and it also gives away clues to an LS V8 being the engine powering this fiber-glass road-hugger.

The company continues to make its lofty statements on the Devel Sixteen’s production. Plans include the launch of three variants powered by 2,000 hp, 3,000 hp, and 5,000 hp, with price tags of $1.6 million, $1.8 million, and $2.2 million respectively. Seven examples will be made each year with an unnamed facility in Texas handling the manufacturing process.

Sorry guys. We are not convinced at all and we are not going to fall for this tacky kit car rolling around the Middle East, propelled by popular motor vloggers than a 5,000 hp V16.