Oh, yes, we are serious. The new 2019 Chevrolet Corvette ZR1 is not just the fastest Vette ever made. It’s also the most powerful one of its kind.

Have you seen Thor: Ragnarok? If you haven’t, then you should. It has reinvigorated the franchise in ways which nobody ever imagined. Just like the latest installment in the God of Thunder saga, the Chevrolet Corvette has put itself through a major image makeover. Top to bottom, comprehensive and thorough. And what have we got here after that trip to the salon and gym thereafter? This is the devastatingly good-looking and mind-blowingly capable 2019 Chevrolet Corvette ZR1 – also known as the fastest and the most powerful Corvette GM has ever built. 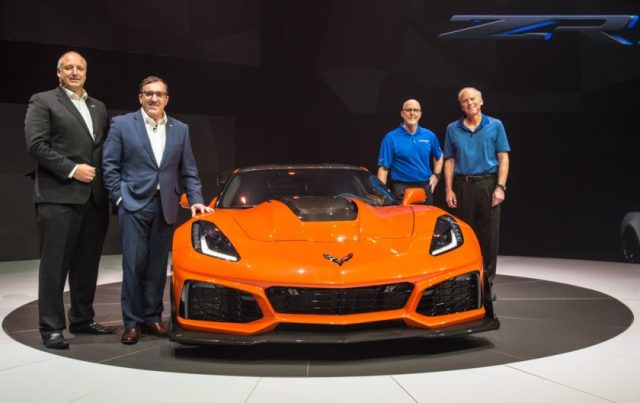 This is why we love the end of the year. It’s sort of the time that the gifts started getting wrapped up and some of them are unwrapped a bit earlier. The 2019 Chevrolet Corvette ZR1 is one such Christmas gift which came early and the unveiling took place in Dubai.

Powered by a supercharged 6.2-liter LT5 V8 engine that churns out 755 hp of power and 715 lb-ft of torque, it’s being hailed as the most potent car of its kind to have rolled out of a GM production facility. And with a claimed top speed of 210 mph, it’s bloody fast whether you take the 7-speed manual or an optional 8-speed automatic transmission. Do note that this is the first time that a ZR1 Corvette is coming with an automatic gearbox.

A 210 mph Corvette will need a lot of downforce to keep the car glued to the ground. So Chevrolet has opened up two aerodynamic packages for customers to choose from. Aptly named, Low Wing and High Wing, these two packages have the kind of aerodynamic elements which will provide the necessary downforce to ensure that the car behaves the way it should when pushed to the limit. High Wing offers more downforce – 950 pounds to be exact – while Low Wing doesn’t weigh down the ZR1 so much, while still managing to give it the required amount of downforce needed. A snazzy front underwing lends the rear wing additional support in terms of balancing out the aero.

Having a load of aerodynamic elements and changes on the body translates to a hyper-aggressive-looking sports car and the ZR1 is exactly that. Lots of carbon-fiber here as the ZR1 has truckloads of the lightweight material going into its construction.

The reworked front fascia, the towering “halo” hood, the sharper lines – the 2019 Chevrolet Corvette ZR1 has all the makings of a poster car which teenagers will love to have on their walls and men would crave to have in their garages. And we are certain that many would prefer to have the new ZR1 kitted up in that drool-inducing Sebring Orange Design Package.

Pricing has not been announced as the 2019 Chevrolet Corvette ZR1 is yet to make its North American public debut.