Superformance made the choice of creating a restomod GT40 – the Future GT Forty – with the design of the classic Le Mans-winning racer and the EcoBoost V6 engine of the modern-day Ford GT.

We can see the frowns already on the faces of all the purists out there. You are not going to like this car. Most probably you’ll end up throwing up in your mouth upon hearing that this gorgeous adaptation of the Le Mans winner from the past has a V6 instead of a V8. Usually Superformance GT40 1960s era continuation cars have a big V8 in the middle. But the Future GT Forty presented at the 2018 SEMA Show came with an EcoBoost V6. That’s the same 3.5-liter twin-turbocharged unit which powers the current generation Ford GT and its Le Mans avatar.

The Superformance Future GT Forty features the design of the MkI GT40 which was the first iteration of the Le Mans race car that beat Ferrari on the latter’s own turf in the 1960s. However, the livery with the number 68 is a reference to the 2016 24 Hours of Le Mans GTE class winner. A carbon-fiber aero kit is in place and that enormous wing at the rear give the Future GT Forty that menacing look that we dig. 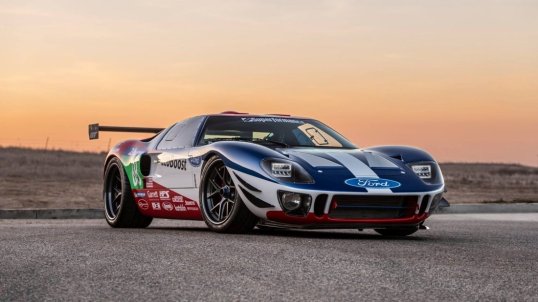 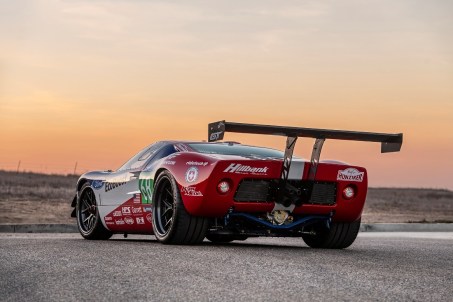 The show car belongs to Doug Campbell and was built to meet his specific demands. So is it a one-off? Nope. Superformance will be building more, provided there are customers lining up for this modern tech-meet-classic looks combination. The price tag will be close to $180,000 and that’s slightly more than the Superformance MkI GT40 with V8 power. Anyway, the price won’t make that huge a dent in your wallet as the new Ford GT.

The EcoBoost V6 powertrain mated to a 5-speed manual gearbox is good enough for producing 647 hp of power and 550 pound-feet of torque. Superformance has done a round of tuning as well and have added two Honeywell Garrett turbochargers as well as a custom Magnaflow exhaust. While we are still in the dark on how much more oomph that exercise has managed to squeeze out, it’s safe to assume a near-700 hp power output.

Can we call this blasphemy? In a way, yes. Because a GT40 must be having nothing less than the beating heart of a big V8 behind the seats. But, if you are willing to live with the absence of that powerful V8 roar, the Superformance Future GT Forty is not going to disappoint you. The company knows what they are doing and have been making amazing kit cars for a while. Plus, you don’t have to cough up half a million dollars to own and maintain their cars.