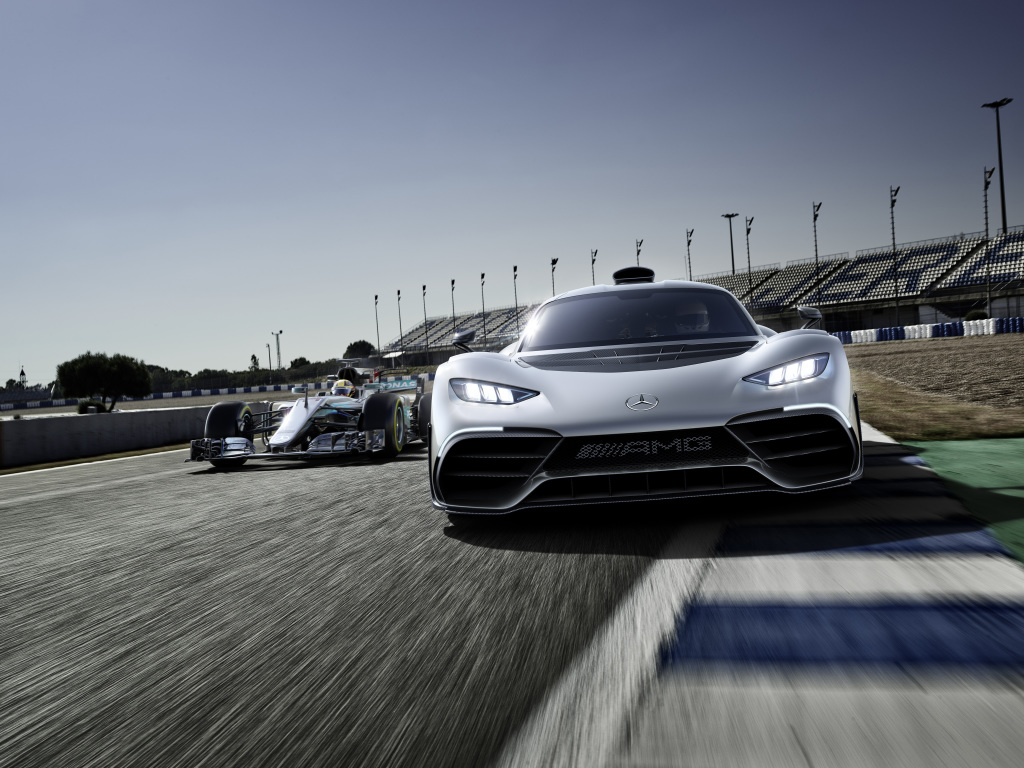 The holy trinity of hypercars launched 4 years ago were described by many as Formula One cars for the road – the closest you will ever get to driving an F1 car. High performance engines aided by electric motors for blistering acceleration, free of any sort of turbo lag (in case of the McLaren P1). The cars had their hybrid technologies and aerodynamic elements borrowed directly from F1.

The Mclaren P1, Porsche 918 spyder and Ferrari LaFerrari were the absolute pinnacle of automotive performance on the road. Everyone who drove the cars were left gobsmacked. In the words of Chris Harris himself who after driving the P1 at Yas Marina Circuit in Abu Dhabi described the car as “a whole new thing”. Now, here we are in 2017 with the next-generation of hypercars – Aston Martin Valkyrie and the Mercedes-AMG Project One.

Project One is a result of Mercedes-AMG engineers in Brixworth joining hands with the Mercedes-Petronas Formula one team to build a road car on top of Lewis Hamilton’s 2015 championship winning F1 car. We saw a close concept at the 2017 Frankfurt Motor Show. Then, there is the Aston Martin Valkyrie – To come to terms with the absolute monstrosity of the car, think of something that is half a tonne lighter than your favorite hypercar from the holy trinity. Now, bring in Adrian Newey to shape the aerodynamics – the wizard from Red Bull Racing. Now, you are getting close. Add in a naturally-aspirated V12 that revs up to 11000 rpm and combine it with a 130 hp electric motor and a Rimac sourced KERS (Kinetic Energy recovery system). That’s the Valkyrie for you.

While we don’t know everything about the two cars, there is enough information out there to do a spec-comparison of the Valkyrie vs Project One. While the Valkyrie’s Cosworth built naturally-aspirated V12 is loosely derived from a Williams’ 2010 F1 car, the Project One is built on top of Lewis Hamilton’s 2015 F1 powertrain.  It features a 1.6-liter, turbocharged V6 and four electric motors – two with 160 hp each driving the front wheels, one integrated to the turbocharger and another mounted directly to the combustion engine. Even the battery cells and their architecture is the same as the one on the F1 car.

Mercedes-AMG hasn’t revealed the total output of the powertrain but it is estimated to be more than 1000 hp. The performance will be free of any turbo lag. In fact, according to Mercedes, the response times are even shorter than that of a naturally-aspirated V8. As much as there is the hype about the powertrains, the performance claims are no less electrifying. Mercedes-AMG CEO Tobias Moers has already promised a Nurburgring lap record attempt which shouldn’t be too difficult to achieve. On the other hand, Adrian Newey doesn’t seem interested. His goal is a little more spellbinding – he aims to build a car that will be faster than an F1 car around Silverstone. Just let that sink in. The shape of these cars is governed by aerodynamics. Engineers are still fine tuning the shape of both cars. What we’ve seen so far is about 90% of the final product. The Project One has smooth bodywork for air flow with aero trickery going on everywhere – NACA ducts, roof air intake that extends back to a shark fin, a winglet on top of the rear spoiler, hollow undersides for airflow. While, the Mercedes-AMG Project One is a combination of traditional hypercar design and modern technological elements, the Aston Martin Valkyrie is unlike any road car we’ve seen before. The Aston Martin logo is 30 percent thinner than human hair. It has no rear view mirrors, no grille, headlights 40% lighter than the lightest series production headlights all point to the absolute focus on light weight. That’s what you expect from a man who describes the holy trinity as “big, heavy and clumsy”.

Just like the Project One, the car has a central roof air intake. Both cars also feature a hollow underbody. Project One has rear view mirrors but the Valkyrie doesn’t. Valkyrie will come with gull wing doors while the Project One gets butterfly doors. Both cars have aero optimized, center-locking, lightweight wheels. The bodywork might be totally different in both the cars, but the interior mostly features similar elements. To start off, the interiors are quite compact. In fact, there are no actual seats in both the cars, instead you sit on a padding installed on the monocoque. The steering wheel and pedals are adjustable for the right driving position. Speaking of the driving position – you sit so low that your hips are actually below the ankles, just like in a Formula One car. The steering wheel with the LED shift indicators in both the cars looks to be borrowed from F1 as well.

You won’t find a traditional dashboard in the Valkyrie. All the controls have been integrated into the steering wheel. It’s a similar story with the Project One. A pair of displays replace conventional rear-view mirrors in the Valkyrie to save weight. The Project One interior displays are made of weight optimized metal for the same reason. Since we are talking about F1 cars for the road, let’s also talk about the sound. Sound was one of the reasons, Adrian Newey chose a naturally-aspirated V12 for the Valkyrie rather than a turbocharged V6. Newey also insisted on using a twelve-into-one exhaust system rather two six-into-ones because according to him, “that makes it sound like it’s revving twice as high as it actually is.” He described the car’s sound as being ‘shrieky’. Remember when F1 cars used to sound great? Yes. That sound.

Expect the Project one to sound similar to Hamilton’s race car. Many people who were at the car’s unveiling at Frankfurt described the car’s sound as “beasty”. The design for the Valkyrie will be finalized this month, while the first prototype will be out for testing by the end of the year. First customer cars will be delivered by the end of 2018. All 150 road cars and 25 track versions are already sold at $3.5 million each.

The Project One is still in its final stages of development. Prototypes will start testing later next year with first customer cars rolling off the production line in 2019. The base price for one of these is $2.7 million and all 275 examples have been sold. Both the Aston Martin Valkyrie and Mercedes-AMG Project One are the pinnacle of what the Internal Combustion (IC) engine can achieve. Aston Martin and Mercedes-AMG are exploiting whatever is technically feasible today. The last time we saw such a pursuit for performance, the Mclaren F1 was born. This time there are two players instead of one.