The first Lamborghini Centenario has been delivered to its owner.

The Lamborghini Centenario was showcased at the Geneva Motor Show last year. The model on display was finished in bare carbon fiber with yellow accents. The first customer Centenario however, is specced in a stunning shade of orange.

What do you think of the spec on the Sheikh’s Centenario? Let us know in the comments section below. 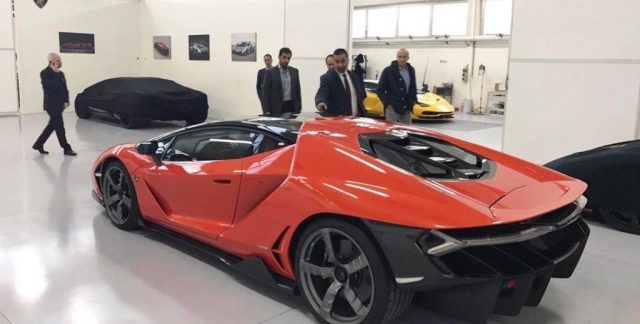 The Centenario is being to celebrate Lamborghini’s 100th anniversary. The brand founded by Ferruccio Lamborghini has been building insane supercars for a century now and what better way to mark the occasion than by launching a limited edition supercar.

The Centenario is limited to just 20 coupes and 20 roadsters

Meanwhile, it appears a second Centenario is ready for delivery already. You can clearly see a yellow Centenario parked in the background.