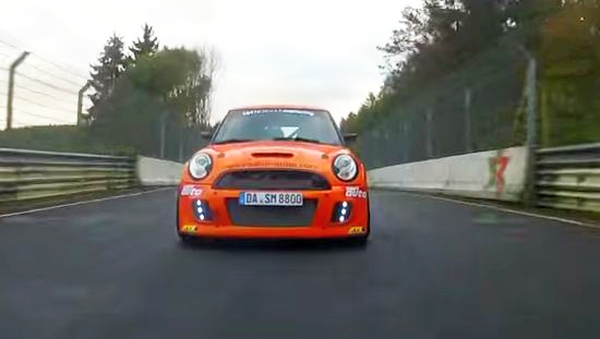 Setting the fastest lap time around the infamous Nurburgring Nordschleife is considered to be a big thing in the automotive world. More than anything, it earns manufacturers bragging rights and who wouldn’t want to feel smug. Renault recently set the fastest time for a front-wheel drive car on the “Ring”. Renault Megane 275 Trophy R lapped the circuit in 7 min 54 sec. Now, a heavily modified Mini John Cooper Works has just beaten the Megane’s time. It completed the lap in 7 min 44 sec.

What’s even more astonishing is the fact that, the tuned Mini JCW equals the lap times of a Pagani C12 S, Lamborghini Murcielage, Porsche 911 GT2, Ford GT and an Audi R8 V10 with a nominal difference of a tenth or so. That’s some feat and a lot to brag about.