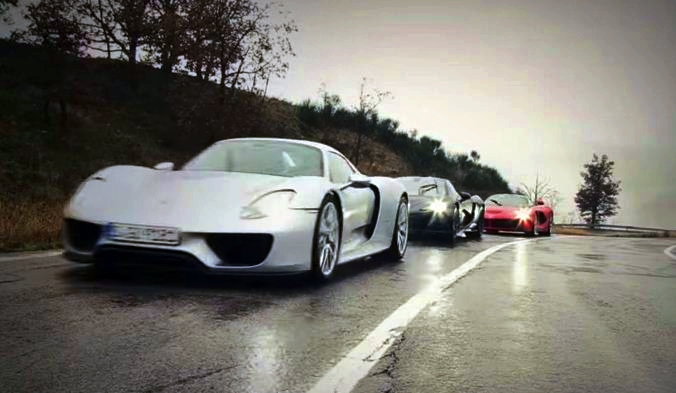 [Update] Here is the full video of the supercar comparison and a world exclusive road test of the latest, most advanced hybrid supercars.

[Jan 3, 2015] It was inevitable. A combined test between the top three supercars of the day. Mclaren P1 vs LaFerrari vs Porsche 918 Spyder will be featuring in Top Gear’s upcoming review. They have kindly released a teaser video of the elite supercar test which was staged on twisty country roads in Italy.

Top Gear Magazine would be the first to publish a comparison of all three hybrid supercars that have been on the talk of the town for almost a couple of years now. Richard Hammond drove the Porsche 918 Spyder in Abu Dhabi for season 21 of Top Gear and he described it as nothing like he’d ever driven. Jeremy Clarkson drove the Mclaren P1 and was blown away by the sheer power and grip levels.

We are still yet to see a standalone test of the LaFerrari on Top Gear which could feature in series 22 which starts this Sunday. But, a triple comparison is something the world has been waiting for and it would be interesting to see what folks at Top Gear think of the best hybrid supercars on the planet.