The movie car from 2011’s The Green Hornet is on sale. We can safely say that the “Black Beauty” Chrysler Imperial is among the few things that everyone liked about the movie.

Made on a budget of $120 million, the Seth Rogen starrer from 2011 was not the blockbuster that the studio thought it would be. The star cast was promising, with Cameron Diaz, Jay Chou and Christoph Waltz in the main roles. Despite that list of impressive names, The Green Hornet managed to settle for $227 million at the box office, somehow saving itself from being a total write-off on the ledger.

Critics didn’t like it that much. But the live-action movie adaptation of the radio show from the 1930s did get some love for its stunt choreography and for the “Black Beauty” Chrysler Imperial Crown which the titular character and his sidekick Kato drove around. 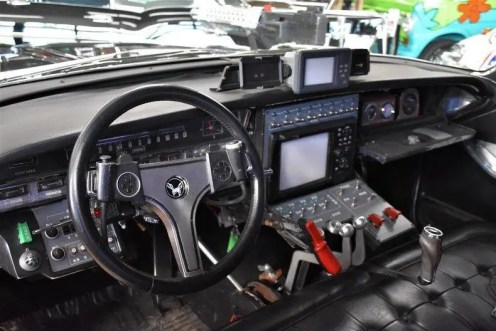 If you happen one of the many movie car buffs who loved the Black Beauty, then here is the golden opportunity to get it. AutoClassics has got one of the surviving stunt cars for sale. It’s in great shape and has all the non-functioning (obviously) weapons to terrify your neighbors and their dogs. A Chevrolet 454 cubic-inch big block V8 engine rests under the hood and is mated to a Race Trans Turbo 400 transmission. Ford differentials and four-wheel disc brakes are in place to keep the Chrysler Imperial Crown on a leash.

A total of 28 cars were made for The Green Hornet movie. Two of these were hero cars which would step in for close-up and glamour shots during filming. The remaining 26 were stunt cars and each one of them catered to a specific need. Some of them packed all the weapons and gear, while others were tuned for the challenging chase scenes which put some real pressure on the cars. Another was cut in half as the final chase sequence sees the Black Beauty meeting its end in a gruesome fashion.

Head to AutoClassics for more details and images. And crime fight responsibly.