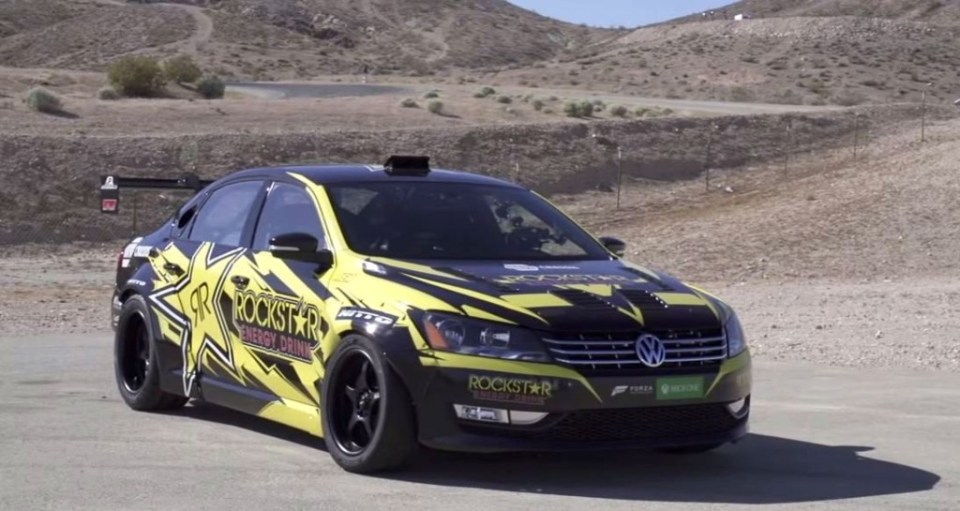 Tanner Foust had taken time off from Formula Drift and recently has been running in Global Rally Cross. He also had a chance to host American Top Gear for BBC for sometime, but now Foust is planning his return to drifting. Volkswagen has been his main sponsor for Rally Cross where he races a Polo GRC. So it was expected that Tanner would opt for a VW to race in Formula Drift in 2015. However, we never would’ve guessed his model of choice. VW Passat!

Stephan Papadakis of Papadakis Racing has prepared the car for Tanner. It starts off as a dreary four-door saloon which is then ripped apart leaving just the exterior shell. But, there’s a big problem with the Passat. Unlike the rest of FD challengers, it is front-wheel drive car which according to drifting experts, “ain’t no good for sideways stuff”. The solution- cut open the bodyshell and custom build a transmission tunnel. Then, make space for the rear axle and limited-slip differential. Throw away the V6 diesel motor in the bin and plonk an LS7 V8 engine mated to a G-Force 4-speed dog box transmission.

Unlike the measly 280 hp diesel that resided under the hood, the LS7 engine generates a respectable 700 hp which with a shot of Nitrous peaks at 900 hp. That would sufficient for the rear tires light up and the car to go sideways, I suspect.