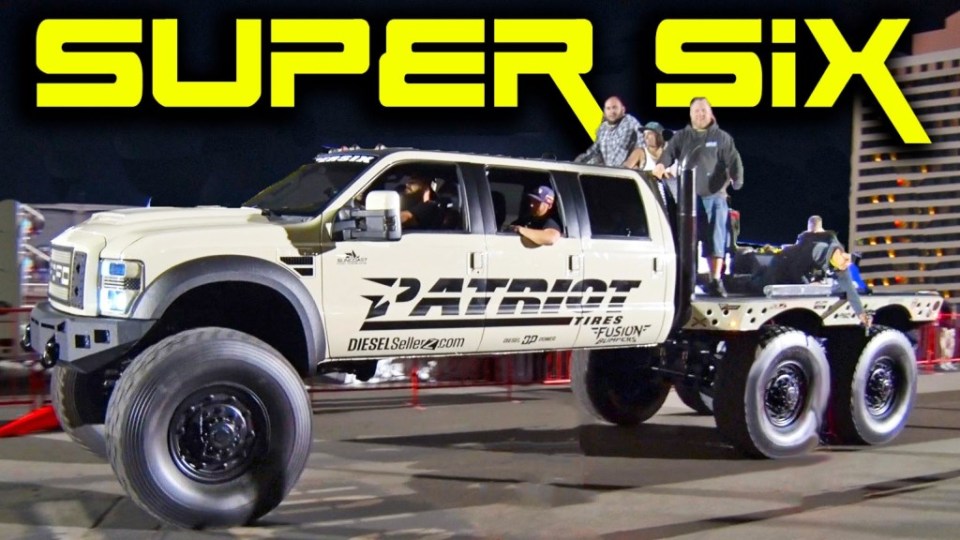 If you think the Mercedes-AMG G63 6×6 is the craziest, most obnoxious vehicle around, check this out. It is a custom built Super Six Patriot Ford Monster based on a F-550 truck.

It is the brainchild of Dave Sparks who was featured on ‘Diesel Brothers‘– a popular show on the Discovery Channel. He got the idea from a previous build he did for the SEMA show. It was a 4×4 Dodge Mega Ram Runner. So, the next logical step was to go 6x6x6 and that’s how the Super Six Ford Monster came to life.

The truck makes use of the stock 6.7-liter V8 Turbo Diesel engine from the F-550. However, internal components like push rods, pistons and valve springs had to beefed up. High pressure injectors and twin-turbos were thrown in for good measure so that the engine now makes around 700 hp.

The best feature though is the all-wheel steering. this allows the 30 ft long truck to turn in tight spaces, crab and make 360 degree turns with ease. Independent air suspension on all three axles provides a comfortable ride for its occupants.

We think the Super Six Patriot Ford Monster Truck 6x6x6 is the ultimate off-road vehicle. The Mercedes-AMG G63 6×6 stands no chance against this mighty beast.

Let us know what you think in the comments section below.