The fuselage of an actual Learjet business aircraft went on to become the foundation for the Limo-Jet. And it’s for sale at $5 million.

It isn’t available for rental yet. But this wonderfully-weird limousine built around the fuselage of a Learjet business aircraft is for sale at a whopping $5 million. In case you would like to have one custom-built, the makers – an Illinois-based builder called Jetsetter, Inc. – will create one at a 7-figure cost.

The Limo-Jet took 12 years to materialize and is the first of its kind. The project did hit the brakes in between that decade-long timeline, but somehow the team got it back on track before wrapping it all up beautifully. The end result is one bizarre yet amazing limousine. 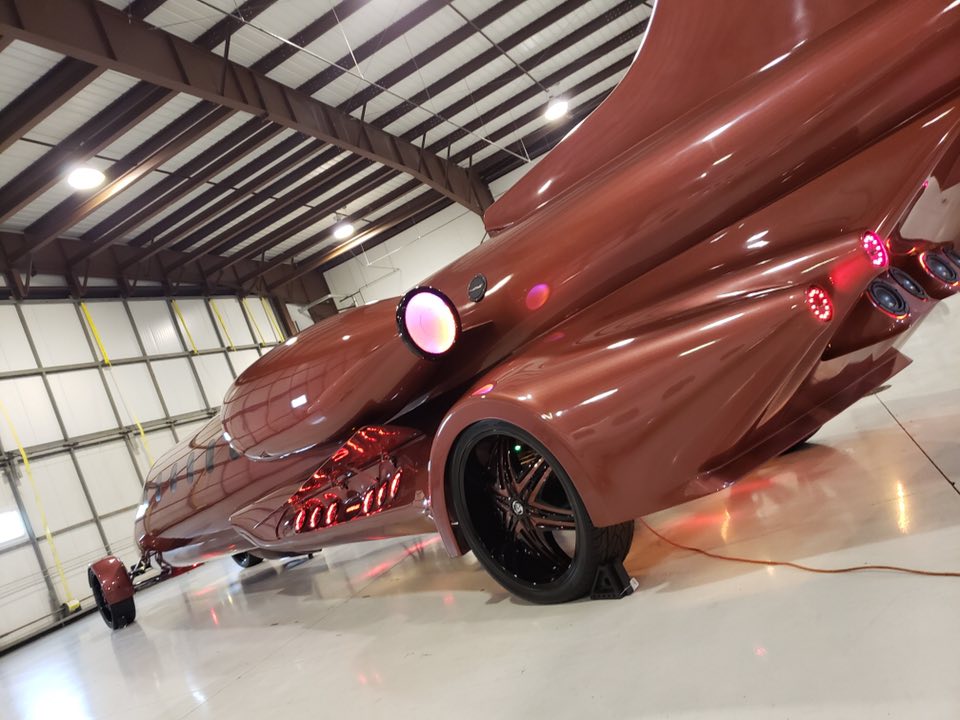 Standing tall with the tail reaching a height of 11.6 feet and the whole vehicle covering 42 feet in length, the red-metallic Limo-Jet weighs a staggering 5.5 tonnes. Despite the length and weight, the Learjet limo can still clock 100 mph, with a standard GM Vortec V8 powering it. Wheels are 8-spoke 28-inchers.

A lot of custom work has gone into the build – both in terms of bodywork and mechanicals. The suspension setup and components came from firms which are into motor racing. The entire rear section cowling was crafted from fiberglass and took almost 9 months to complete. The electrical system was another time-consuming part of the project.

A total of 100 highly-skilled people, spread across various domains, have worked on the Limo-Jet project. No wonder, the attention to detail and craftsmanship of the end result are of high standards. Be it the cockpit, where a conventional steering wheel sits alongside lots of screens and fancy aircraft buttons or the lavishly appointed passenger area with its high-end entertainment system and creature comforts, the Limo-Jet is well-built.

Quick trivia. The jet engine nacelles flanking the rear portion of the fuselage house massive speakers with fancy illumination. So the Learjet can be more than your ride to the party. It can be the center of the party itself, provided there is enough road and room to let it in.

Head over to the dedicated Facebook Page for more images and info. Watch the video above for a detailed overview of the bespoke limousine or browse through the rental options in your city on Limofind.com.