South African Revenue Services (SARS) have seized an illegal Ferrari LaFerrari which was smuggled into the country. The R138 million ($3 million) supercar has been stored in a bonded warehouse since 2014 after the owner failed to pay the taxes and import duties.

According to the authorities, “the owner failed to follow correct import procedures including paying the necessary custom duties and VAT.” The supercar was impounded and has thus been sitting in the warehouse for three years.

In February, the owner submitted an export declaration to transfer the vehicle to the Democratic Republic of Congo (DRC) via South Africa’s northern border with Zimbabwe. After crossing the border, the car was allegedly smuggled back into South Africa. 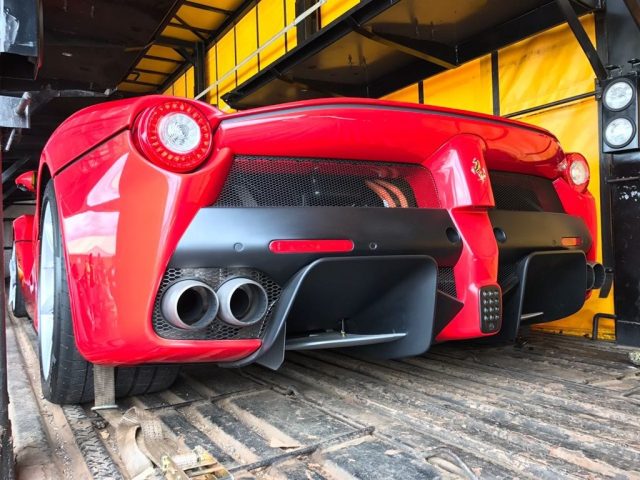 Now, the illegal Ferrari LaFerrari has been detained and a letter of intent has been issued to the owner.

As such, importing left-hand-drive vehicles into South Africa is a punishable offence. So, even if the owner pays the tax dues, he would still be unable to drive the vehicle.

The fate of this LaFerrari is now in the hands of the SARS and is probably on the way to the crusher. We hope they auction it off instead of destroying it.

I’m sure there are genuine people who are still trying to get their hands on a LaFerrari. We hope someone comes forward to save this rare masterpiece from the jaws of the crusher.