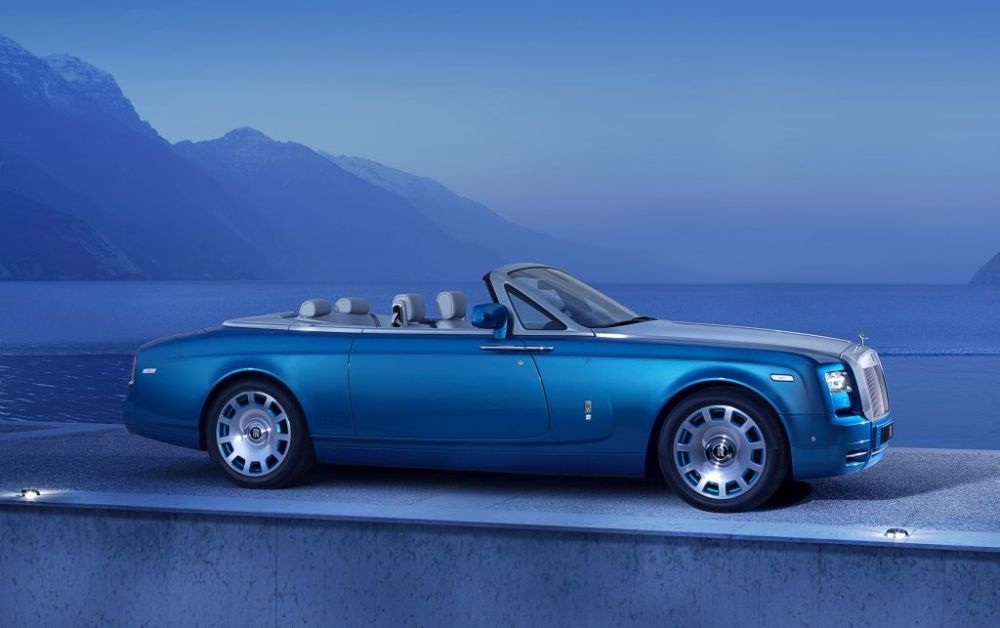 Rolls Royce is all set to debut an exquisitely designed, bespoke Phantom Drophead Coupe in the U.K. This marks also marks the European debut of the luxury convertible. It is called the Rolls Royce Phantom Drophead Coupe Waterspeed Collection and will be unveiled at the site of the original Bluebird Motor Company on King’s Road, London. The Bluebird Motor Company was known for their characteristic Art Deco style. The company also funded Sir Malcolm Campbell’s attempt to break the world waterspeed record. Campbell then went on to  set a world record speed of 126.33 mph in the famous Bluebird K3 boat powered by a Rolls Royce R engine.

The Waterspeed Collection features truly exclusive design elements inspired by Sir Campbell’s record breaking boat. The paint finish is specially developed for this particular car. The ‘Maggiore Blue’ is named after the Italian lake which was the venue for the waterspeed record attempt back in the year 1937. To achieve an impeccable finish, the metal surface of the Pantom Drophead is applied with nine layers of paint before sanding it down by hand following which a powdered lacquer is applied. For the first time ever, the engine bay is also painted in the same Maggiore blue. Brushed steel makes up the bonnet and rear deck which for a single unbroken unit of brushed magnificence. The wheels are specially polished with blue accents. Also a first, is the dual-tone steering wheel. The dashboard features subtle details inspired from the original Bluebird.

The Windchill grey leather upholstery goes well with the blue exterior and the brushed steel accents. Campbell’s famous Bluebird motif is hand-engraved on the door armrest tunnel caps. It takes eight hours to complete this one single piece. Abachi wood also makes its Rolls-Royce debut in Waterspeed. Rolls Royce also developed a brand new clock for the Waterspeed Collection. The dials too are specially modified with a ‘power reserve’ meter designed on the same lines as Campbell’s record breaking boat.

Two highly fitting locations have been selected for the UK and European debuts of the latest Bespoke Collection from Rolls-Royce Motor Cars.

The Rolls-Royce Phantom Drophead Coupé Waterspeed Collection will be previewed to selected UK press and customers at an exclusive event on the site of the original Bluebird Motor Company – now the Bluebird Restaurant – on the King’s Road, London on Tuesday 13 May 2014.

The Bluebird Motor Company building was commissioned in 1923 to be Europe’s largest garage and was built in the era’s characteristic Art Deco style, a style which it preserves today. The business would ultimately help fund Campbell’s pursuit to wrest the Waterspeed record from its American holders.

The car will then head to the world-renowned Concorso D’Elegenza at Villa D’Este on the shores of one of Italy’s world-famous lakes, Como, where it will be unveiled to the public for the first time. It was on the adjacent Lake Maggiore where, on 1 September 1937, Campbell established his legend, setting a world-record speed of 126.33 mph in the famous Bluebird K3 boat powered by a Rolls-Royce R Engine.

“This very special motor car serves to pay a perfect homage to my grandfather’s remarkable acts of British daring and endeavour,” said Donald Wales, grandson of Sir Malcolm Campbell. “The extraordinary attention-to-detail and commitment to engineering excellence so evident in these motor cars perfectly echoes the lengths my grandfather and his colleagues went to in their pursuit of the waterspeed records.”

The car is finished in a specially developed ‘Maggiore Blue’ exterior paint, inspired by Bluebird’s famous colour scheme. Nine layers of paint are applied before an exhaustive process of hand-sanding and the application of a cutting-edge powdered lacquer is undertaken to ensure an impeccable finish. For the first time in Rolls-Royce history the exterior finish extends to the engine, creating a visually striking homage to the power behind Campbell’s records. The finish also adorns the car’s specially developed, fully-polished eleven-spoke wheels for the first time, providing a subtle decorative accent.

The exterior is completed with a hand-painted coachline that culminates in a Bluebird motif with the design taking Rolls-Royce’s master coachline painter four hours to apply by hand.

Phantom Drophead Coupé’s traditional teak decking to the rear makes way for brushed steel. Each piece of material is individually panel-beaten by hand for 70 hours following initial mechanical pressing. A Rolls-Royce craftsperson will then hand-brush the metal for over 10 hours – showcasing the fastidious attention to detail and commitment to hand-craftsmanship that informs everything undertaken at the Home of Rolls-Royce.

The car’s Maggiore Blue exterior finish is subtly echoed on the interior via accents on the dash-board that perfectly complement the Windchill Grey interior leather scheme. The marque’s hallmark attention to detail extends to the application of hand-engraved door armrest tunnel caps featuring a new interpretation of Campbell’s famous Bluebird motif. The armrests alone take eight hours to complete. Abachi wood also makes its Rolls-Royce debut in Waterspeed. By nature the material is cool to the touch with a satin-like tactility, and is bookmatched at an angle to echo the wake left by a boat moving at speed.

Further reference to Campbell’s craft is made via a new interpretation of the famous ‘power reserve’ dial. As the driver presses on, the dial moves backwards towards a yellow and blue zone, echoing Campbell’s original K3 boat’s ‘going into the blue’ at maximum engine revolutions. A Bespoke front-lit clock adorned with Bluebird’s infinity symbol and dials hewn from a billet of aluminium evokes K3 further. Direct tribute to the records is paid in the glovebox, with a hand-embroidered panel expressing the records Campbell achieved at Lake Maggiore and Coniston Water. Finally, the steering wheel is presented in two-tone for the very first time, with Magiorre Blue accents balancing perfectly with traditional black leather to complete a beautifully conceived interior design scheme.