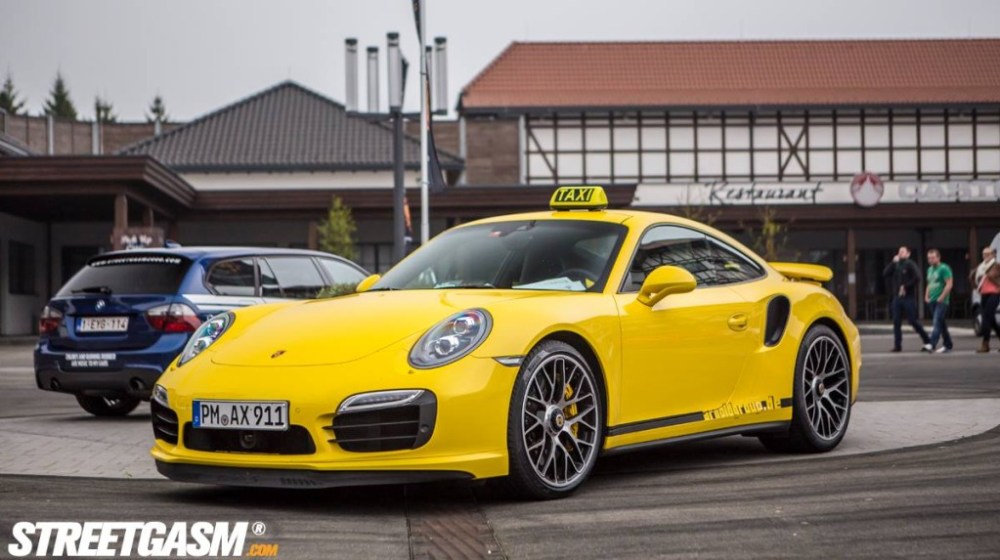 A Porsche 911 is a serious performance machine for connoisseurs. A Porsche 911 Turbo S is the best 911 model money can buy and with the 991 generation, Porsche has created a rear-engine, all-wheel drive machine that go beyond 200 mph without falling to pieces. But, that calls for the occupants to have balls of steel and granite. So when this guy decided to convert his pride and joy into a taxi, he probably didn’t take into consideration, the fact that the rest of us probably won’t have bowels that could withstand the forces at such high speeds.

A Porsche 911 Turbo S is perhaps not the most ideal taxi. It isn’t as practical as a van, nor does it have a big boot. However, if you running late for the evening flight, this is probably the most ideal machine to help you reach the gates on time. Alright, this isn’t a real taxi-cab. It is actually a 911 Turbo S prepared for an annual European rally called StreetGasm 2000 Challenge. That said, this Porsche 911 Turbo S uses the same 3.8-liter twin-turbocharged flat-six engine that generates 560 horsepower and up to 750 Nm of torque. That’s enough poke to get you from standstill to 100 kph in just 2.7 seconds and towards the magical figure of 200 mph. That said, it costs over $180,000, which makes it quite an expensive taxi.