Last week Total911 got exclusive access to the new Porsche 911 GT2 RS. Yes, we’re talking about the “widowmaker” and not the GT3 RS.

Andreas Preuninger, head of Porsche’s GT division was kind enough to take them for ride in a 911 GT2 RS prototype. Although there’s little information about the upcoming model in the public domain, he did reveal some interesting tit bits. Preuninger talked about the engine, drivetrain and more importantly, it’s Nurburgring lap time.

The new Porsche 911 GT2 RS will be powered by a 3.8-liter block instead of the 4.0-liter unit found on the new GT3. That said, its twin-turbochargers make up for the lack of capacity. It’s a revised version of the 3.8-liter engine from the Turbo S, Preuninger said.

No manual gearbox on this one. The RS is built for lap times and hence the PDK dual-clutch transmission is best suited for it. Traditionally, the GT2 RS has been rear-wheel drive. The new one is no exception. 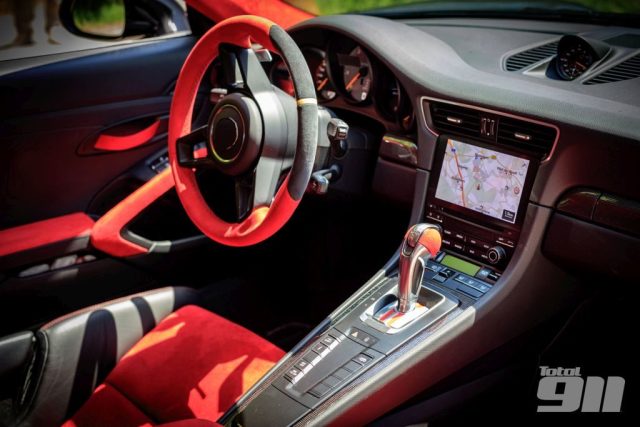 The new GT2 RS uses rose-joints for a super-stiff chassis. An upside-down damper setup and revised spring rates will make it the most extreme Porsche road car. The car weighs less than 1500 kg and features rear-axle steering. Ceramic brakes will be standard.

Customers will be able to spec their cars with the optional Weissach pack. This replaces the magnesium roof panel with a carbon fiber roof for a total weight saving of 30 kg.

Porsche is yet announce the official lap time, however according to Preuninger, the GT2 RS could lap the Nurburgring in 7 min flat! That’s quicker than the 991.2 GT3.

But, don’t get too excited after reading this. Porsche is building just a 1000 GT2 RS’ and all of those have spoken for already.