It seems they have received the 100 orders they were looking for.

Being readied for its WRC debut in 2020, the Porsche 718 Cayman GT4 Clubsport Rally Car will compete in the FIA’s R-GT class.

Porsche is getting into rallying in a big way after showing off that one-off rally-prepped GT4 Clubsport concept at 2018 Rally Deutschland. This time they have a full-fledged, thoroughbred rally car based on the Porsche 718 Cayman GT4 Clubsport.

If all goes well, we’ll see this proper rally machine taking on the Aston Martin Vantage, Porsche 997 GT3, and Fiat 124 Abarth in the FIA’s R-GT class of the World Rally Championship when the rally season of 2020 kicks in. The special class is open to two-door sports cars based on based on street-legal production vehicles complying with a power-to-weight ratio of 7.5 pounds per horsepower. 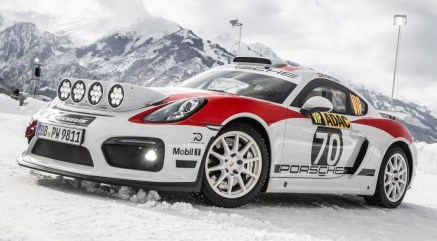 With the all-new production model of the Porsche 718 Cayman GT4 Clubsport serving as the canvas, the rally car gets to draw 425 hp from a 3.8-liter naturally aspirated flat-six engine. A 6-speed PDK dual-clutch automatic gearbox channels all of it to the rear wheels. The ECU has been optimized so that it is capable enough to handle the racing role.

Several body panels are made of a natural-fiber composite material which is being claimed to be on par with carbon-fiber in terms of weight and stiffness. As the rally car shares a lot of its components with the road-going model, it’ll have relatively lower operating costs compared to other cars.

The first test run is scheduled to begin this weekend in Austria at the Porsche Winter Event held before the GP Ice Race in Zell am See. The rally car will be piloted by WEC driver Richard Lietz during the test run.