Only 500 of these limited-edition Nissan Juke GT Sport Playstation will be made and yes, you do get a PS4 along with a copy of the Gran Turismo Sport game on signing the dotted line.

Nissan is doing everything that they can to magnify their association with the recently-launched Gran Turismo Sport video game. The PlayStation racing game has been raking in positive reviews since its launch in October. Nissan’s PR team even put together a full-scale remote-controlled version of the flagship car – the Nissan GT-R – to promote the car maker’s association with the video game.

While that was a fantastic effort which is worthy of truckloads of accolades, the more recent attempt of launching a limited-edition car called the Nissan Juke GT Sport Playstation is not exactly going to win the same kind of responses.

Anyway, since it’s here, let’s learn to get accustomed to its existence. Fortunately (or unfortunately), only 500 units of the Nissan Juke GT Sport Playstation will be made. Availability will be limited to the European markets with the color choices to be made between Ultramarine Blue and Pearl White. 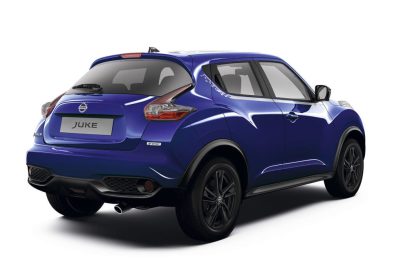 What makes the Gran Turismo Sport-inspired Juke stand out in a crowd are the Tokyo Black 18-inch wheels, PlayStation graphics, special badging, faux carbon fiber door sill protectors, GT Sport mats and a discreet shark fin antenna at the back.

The sweet part of the deal must be the PlayStation 4 console and the copy of the Gran Turismo Sport game which comes bundled with the car. And in case you are wondering whether you’ll get to drive one of these in the game itself, the answer is a resounding “No”.

But we doubt if anyone will actually be concerned about not having the Juke in the list of sensational cars that the Gran Turismo Sport has lined up for its players. For Nissan fans, the GT-R and the Concept 2020 Vision Gran Turismo are part of the lineup.