Lexus LFA driver gets too greedy with the throttle and inevitably crashes the rare supercar.

After what seems to be a failed fly-by attempt, a Lexus LFA lost control, eventually hitting a lamp post before coming to a halt.

The incident which happened on a Singapore street on Sunday evening was captured by Avery Wong who posted it on Facebook. The clip shows the driver of the V10 supercar accelerating hard and losing traction immediately. However, the accident could have been much worse if the car had hit the bus, which was travelling in the same direction as the LFA.

The footage however does not show what happened to the car after it lost traction. Straitstimes reports that the supercar eventually came to a complete stop after hitting the lamppost, which then fell on top of it. Also, the two occupants were able to walk away from the spot.

Later, pictures of the stricken Lexus LFA with a damaged rear right quarter panel and front bumper were posted online. Also apparent is the damage inflicted to the A pillar area as the lamp post landed directly on top it. 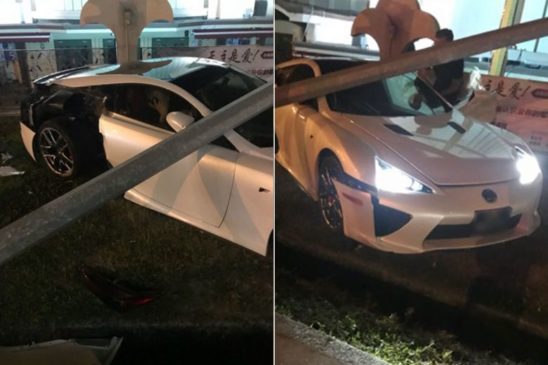