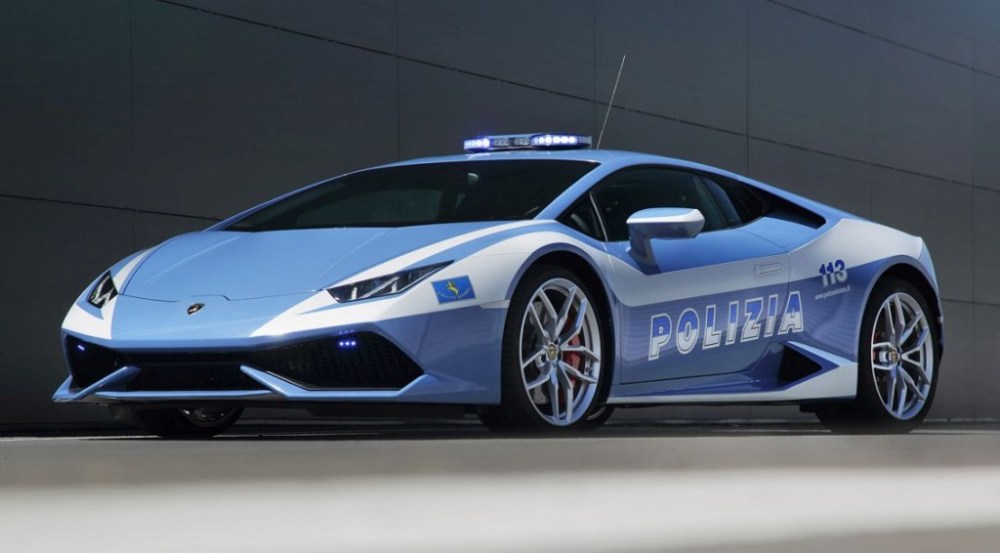 Lamborghini has donated a spanking-new Huracan LP610-4 to the Italian police. The President and CEO of Automobili Lamborghini, Mr.Stephan Winkelmann today handed over the keys to the head of Italian Police. The official handing over took place at the Museo delle Auto Storiche della Polizia di Stato in Rome. The 2015 Lamborghini Huracan complete with Italian police livery replaces the old Gallardo which has been in service for the six years. Unlike, the long list of supercars that the Dubai police are known for, the Italians actually use these cars for law enforcement.

The 2015 Lamborghini Huracan is the latest in the line of entry-level Lamborghini supercars. The LP610-4 replaces the old Gallardo and features an uprated V-10 engine. The mid-engine supercar is capable of doing speeds up to 202 mph (that’s well over 325 kph), thanks to a 5.2-liter naturally aspirated V-10 producing 610 horsepower.

Stephan Winkelmann, President and CEO of Automobili Lamborghini, handed over the car to the head of the Italian State Police, Prefect Alessandro Pansa, in a ceremony in Rome at the ”Museo delle Auto Storiche della Polizia di Stato”.

The new Huracán LP 610-4, which replaces the Gallardos used by the Italian police force since 2004 and 2008, features a 5.2 l V10 engine with 610 hp, and reaches a top speed over 202 mph. The new Lamborghini Huracán police car will begin service within the end of this year in order to sustain security on Italian roads by continuing accident and crime prevention.

Proof of outstanding reliability
Its predecessor is proof of Lamborghini’s outstanding product quality. Since 2004, Rome’s police force has operated the first-generation Gallardo in regular police service, with a further Gallardo run by Bologna’s police since 2005. Both were replaced in 2008 by second generation Gallardo models. In the hands of the Rome police the sports car clocked more than 140.000 km up until 2008, and more than 110.000 km between 2009 and 2014 during patrol duty on central and southern Italian motorways, as well as on emergency medical transport detail. Aside from regular servicing, neither of the super sports cars has required major repairs.

In addition to the clearly effective deterrent offered by the presence and visibility of a Lamborghini on the highway, the equipment on board these vehicles makes them highly effective in the control of hazardous driving behaviour (high speeds, driving in the emergency lane, dangerous over-taking); technologies include automatic number plate recognition and tracking, and real-time transmission of images to the control rooms.

Trouble-free everyday operation and the exceptional safety of the Huracán LP 610-4 comes from its permanent all-wheel drive and refined new hybrid chassis made from aluminium and carbon fibre, which maintains stability even at the highest speeds.

High-tech video system with real-time retrieval
The Lamborghini wears its uniform with pride, painted in accordance with requirements in “blu Polizia” and with the white stripes and lettering following the Huracán’s dynamic design language.

The cabin of the super sports car is fitted with the latest advancements in police technology to immediately document evidence of any transgression. The video system is positioned in the center of the cabin with a camera fitted next to the rear view mirror, and a computer and recording equipment behind the seats. As soon as police officers are alerted to a suspicious driver, they activate the “Proof Video Data System.” With the help of GPS data, the device can calculate the location, direction of movement and speed of the Lamborghini. This, combined with the distance and time before intercept, accurately determines the speed of the vehicle being pursued.

Using radio data transmission, the video system in the Huracán Polizia transfers its images in real time to the relevant police station. There, the videos are stored and used for automatic number plate retrieval. This information can be used for immediate identification of stolen vehicles.

The classic array of police equipment on board too
In addition to its high tech equipment, the Huracán is also fitted with the “classic” array of police equipment, such as a gun holster, police radio equipment and the ”Paletta”: the traditional hand-held stop sign used to advise motorists and traffic offenders to pull over. Officers can then use a removable screen to show offenders their misdeeds immediately, complete with an overlay
of all the associated data.

Rapid response in medical emergencies
The Lamborghini is used regularly for urgent medical transportation, too. The luggage compartment in the front of the vehicle is equipped with a specialized refrigeration system for safe transportation of donor organs. For extreme emergencies, there is also a life-saving defibrillator.

Even the blue light is designed for speed
The police beacon on the roof of the Huracán had to be aerodynamically optimized as the new police car reaches a considerably higher top speed than regular service vehicles. With the extremely flat
construction of the signal lighting, blue LEDs are fitted around the base to ensure the visual signal cannot be missed. The roof-mounted lighting is supported by further white LED signals on the front, sides and rear of the light’s aluminium shell. A total of four sirens integrated into the front and rear of the Huracán generate unmistakable audible warning signals.

Automobili Lamborghini S.p.A.
Founded in 1963, Automobili Lamborghini is headquartered in Sant’Agata Bolognese, in Northeastern Italy. The Lamborghini Huracán LP 610-4, which has made its world debut at the 2014 Geneva Motor Show is the successor to the iconic Gallardo and redefines the luxury super sports car driving experience with its innovative technology and outstanding performance. The Aventador LP 700-4, in Coupé and Roadster offerings, represents the reference point in the world of V12-powered, luxury super sports cars. With 129 dealerships worldwide, in little more than half a century Lamborghini has created an uninterrupted series of extraordinary, exclusive cars that include the 350 GT, Miura, Espada, Countach, Diablo, Murciélago, and several limited series like the Reventón, Sesto Elemento and Aventador J. The Veneno Coupé, the Egoista and the Veneno Roadster, have been created to celebrate the brand’s 50th anniversary year in 2013.