Lamborghini Aventador SV Roadster has been revealed, unofficially. Automotive photographer Jordan Shiraki has uploaded a few images of the upcoming supercar on his website giving us an exclusive glimpse of the 2017 Aventador SV Roadster. Blu Glauco seems to be a new hue adopted exclusively for the roadster and doesn’t it look fantastic! 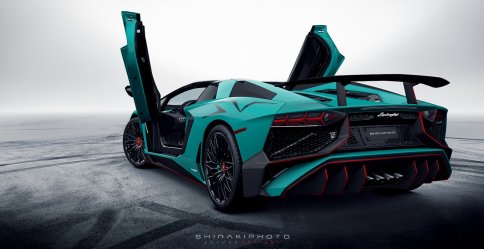 Lamborghini drove to the Goodwood Festival of Speed in their latest Aventador SV. As we all know, ‘SV’ stands for ‘Sport Veloce’ and this badge only goes on the fastest, lightest and the most flamboyant Lamborghini model once every generation. The SV coupe is generally followed by the launch of a roadster and it’s no different this time around.

“The Aventador LP750-4 Superveloce is the most pure, sports-oriented and emotional incarnation of a Lamborghini, and all 600 units have been sold, with first deliveries starting now. We will also produce a roadster version, which our dealers worldwide are now taking orders for”.

The company will be building 600 units of the SV Coupe and is sold out. The SV Roadster would be even more rare as Lamborghini will only build 500 of them. The price of the upcoming Aventador SV Roadster is expected to be slightly higher than the coupe, but that shouldn’t be a reason for those who missed out on getting the coupe.

Earlier, we had published an article revealing the very first spy shots of the SV Roadster being tested. Now, that the official word is out, we could see more of prototypes in the near future. Meanwhile, Lamborghini dealerships across the world are started accepting bookings for the Aventador SV Roadster.