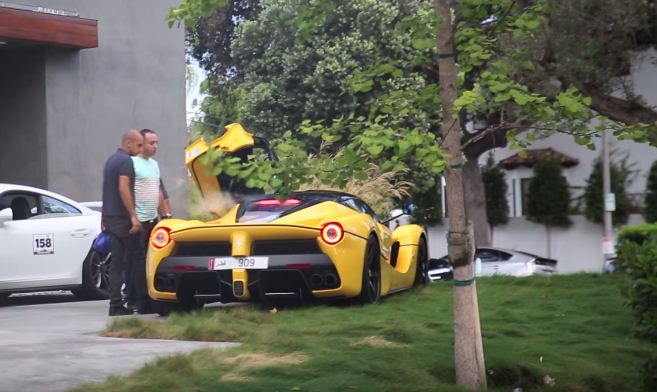 A LaFerarri owner in Beverly Hills got a bit too excited and ruined his supercar. A yellow LaFerrari was doing burnouts in the upmarket part of the Los Angeles recently and this being the heart of Hollywood, tourists were at hand to catch all the action on video.

The LaFerrari was first spotted pulling out behind a Porsche 911 GT3 in bit of a hurry. The following footage looks like a scene from Fast and Furious as both cars can be seen recklessly speeding past an intersection. In another shot smoke starts bellowing out of the engine bay of the yellow LaFerrari with its Qatari license plate clearly visible.

Another thing that we noticed is that streets in Beverley Hills area aren’t particularly ideal for supercars like the LaFerrari. The car can be heard striking the pavement in the opening shot of the video. The underbody can be heard scrapping the pavement again when the smoking LaFerrari tries to enter a driveway.

Meanwhile, the neighbors weren’t impressed by what looks like an unnecessary and dangerous act of showing-off by the LaFerrari owner.