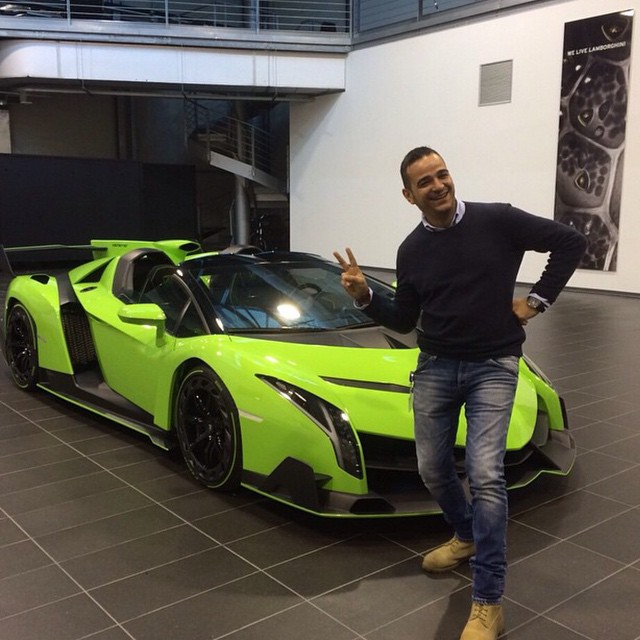 Kris Singh had been in the news recently when he took delivery of his bespoke Pagani Huayra LaMonza Lisa. This rich car buff also owns a list of other, highly exclusive supercars including the Lamborghini Veneno and an Aventador LP720-4 Anniversario. Now, there are just three Venenos in existence and out of the 100 Anniversario edition Aventadors built, Kris has one.

Kris is very active on Twitter and Instagram and that’s where he usually discloses his plans of getting a new supercar. This time, he has posted a picture of him with a green Lamborghini Veneno Roadster. That’s custom Verde Singh shade for you. Although he doesn’t mention anything about the alleged purchase, given the special color, it would be just a matter time until it becomes official.

The Lamborghini Veneno Roadsters is one of nine that were announced at the Frankfurt motor show. Unlike the standard Aventador on which it is based, the Veneno has a 750 hp V12 instead and sports an ultra fancy exterior. It can also accelerate from 0-62 mph in just 2.9 seconds.

My good friend @gae1973 with the Verde Veneno Roadster. Thanks for posting this for me Brother! I’ll see you in January! Ciao!