What was once the fastest production motorcycle in the world got its posterior handed to it by a two-and-a-half tonne super-SUV – the Jeep Trackhawk.

Don’t get us wrong. We love motorcycles. And this must be a case of the rider not being competent enough to engage in the sport of drag racing. Anyway, the result has brought shame to millions of Suzuki Hayabusa fans all over the world. As for Jeep Trackhawk followers, they have their smug “Clarkson” faces on at the moment.

Watch the video below to see the heavy and mighty SUV leaving the Hayabusa way behind in this unusual drag race. Whoever came up with the idea of pitting what was once the fastest production motorcycle in the world against what’s arguably among the most powerful and quickest SUVs on sale, is a genius. But even that chap wouldn’t have seen this being the end result. 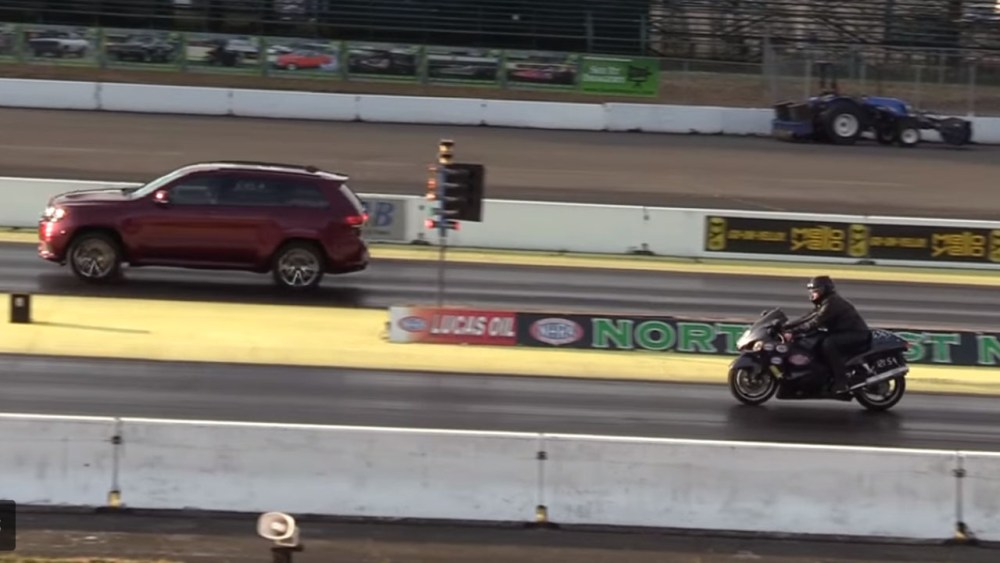 The Suzuki Hayabusa has a proud history of beating supercars and hypercars to a pulp on drag strips. Even though the Busa was displaced by the more hardcore, 249 mph Kawasaki Ninja H2R in the top speed ranking, the former continues to pack a punch with its 194 mph top whack. Seeing it lose to the Jeep is actually a shocker.

It’s unclear on whether both machines are in stock form or if they have been modified in any manner. The Suzuki Hayabusa in the video does flaunt decals belonging to aftermarket parts manufacturers which make us assume that the motorbike has some kind of tuning and performance upgrades in place. The Jeep Trackhawk, on the other hand, doesn’t have the looks of a tuned drag racing vehicle. But then again, looks can be deceptive.

The comments in the video do place the biker’s skills in the firing line claiming that the launch was way off and the Hayabusa lost the battle because of that. We aren’t treating the Jeep Trackhawk lightly at all. The 707 hp SUV is one hell of a fast machine with 11.6 seconds quarter-mile time, capable of 0-60 mph in 3.5 seconds and a top speed of 204 mph. It has also put some worry lines on supercar owners in the recent past.