Before you reach for the phone to order one, allow us to mention that these two Jaguar F-Type convertible rally cars are not for sale. What an unfair world!

You’ve got two options here. One, read through the text below, get to know the Jaguar F-Type rally cars a bit better and then move on to the YouTube video featuring them. Two, skip everything, scroll down, open the video and fast forward to 2:46 to watch the F-Type behaving like a proper rally machine.

We never thought of the Jaguar F-Type as a rally car. Sure it looks amazing and is one of the finest sports cars that money can buy today. But a rally car? Really? Jaguar may have wanted to correct that perception and also celebrate 70 years of building capable sports cars when they drew up the plan to make a bunch of F-Type open-tops that can play with gravel. 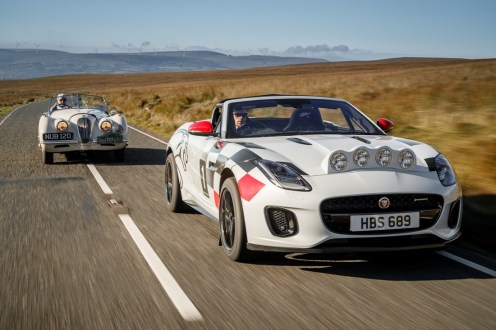 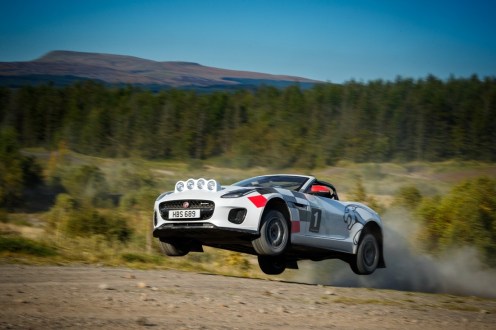 Jaguar Design and Engineering took two Jaguar F-Type convertibles, threw out everything that those cars don’t need to qualify as proper rally beasts, and added all the gear and gadgets needed to take on a rally stage. Surprisingly, Jaguar elected not to modify the 296 hp, turbocharged four-cylinder engine powering the donor cars. Since they went all out with everything else – competition grade brakes, suspension, gravel tires, roll cage, harnesses, seats, intercom, limited slip differential, hood-mounted auxiliary lights, fire extinguisher, and a hydraulic handbrake – it’s a mystery as to why they chose the engine from the entry-level F-Type and kept it stock.

The Jaguar F-Type rally car duo should not be taken as a sign of the manufacturer returning to a motorsport domain which it was quite good at in the past.

Paying homage to the Jaguar XK120 from 1948 – a sports car which established itself a force to reckon with in the RAC, Tulip and Alpine rallies – these two won’t be competing in any WRC events. Jag has no plans in mind to take up rallying with the F-Type convertibles. Again… unfair world.

The promotional video was filmed at the Walters Arena rally stage, South Wales, where the F-Type rally car, the F-Type Chequered Flag Limited Edition, and the 1948 Jaguar XK120 assembled to celebrate 70 years of Jaguar sports cars. The venue also served the purpose of putting the rally cars through their paces. These one-off machines will go on to attend several Jaguar events in the coming months.