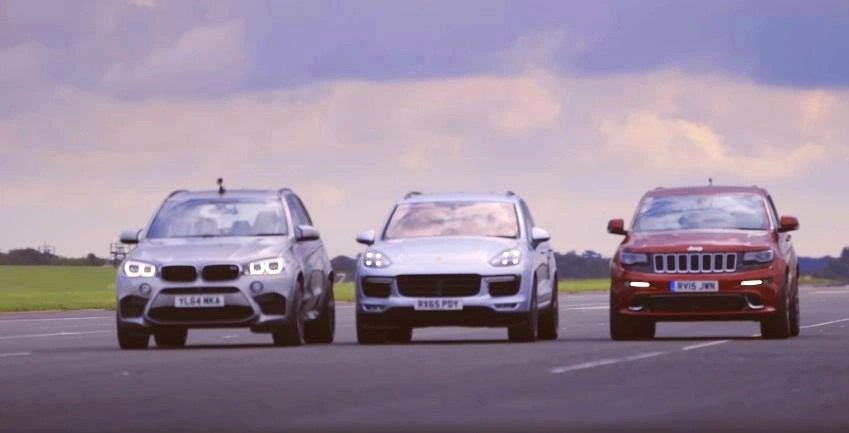 America takes on Germany in a three-way drag race between a Jeep Grand Cherokee SRT, BMW X5 M and Porsche Cayenne Turbo S. All three with unique V8 engines under their hood are among the fastest and most powerful SUVs on the market today. So, which one is the fastest?

Representing America is the Jeep Grand Cherokee SRT sporting a 6.4-liter V8 HEMI engine under the hood. This redneck off-roader puts down 475 hp through all four wheels via an 8-speed automatic transmission. On the German side, you have the new BMW X5 M powered by a 4.4-liter twin-turbo V8 engine that makes 567 hp. Our third contender is the Porsche Cayenne Turbo S which has advantage when it comes to outright power. The 4.8-liter twin-turbo V8 in the Porsche makes a healthy 570 hp.

The Jeep is clearly down on power compared to the Germans. However, it costs around $34,000 less than the X5 M, while the Cayenne Turbo S is the most expensive SUV here.

Basically, it is a race between the BMW and Porsche- the latter being the favorite to win. Find out who wins this three-way drag race and let us know your thoughts on the outcome.