As promised by its makers, a near-production ready Toyota Supra has made its first public appearance at the Goodwood Festival of Speed.

It’s not a static debut this time, as a near-production ready prototype of the upcoming Toyota Supra – codenamed the A90 – made a smashing dynamic debut at the Goodwood Festival of Speed. While it was properly camouflaged with the red, white and blue wrap, which sort of marred the overall experience of viewing it in the flesh, we aren’t complaining at all. It’s great in fact, to see the legendary moniker finally making its resurgence in all its flamboyance.

The debut was made with the new Toyota Supra tackling the famous Goodwood Hillclimb course. Scroll down for the video to treat your eyes with some of that eye candy and yes, the engine note is music to every car enthusiast’s ears. 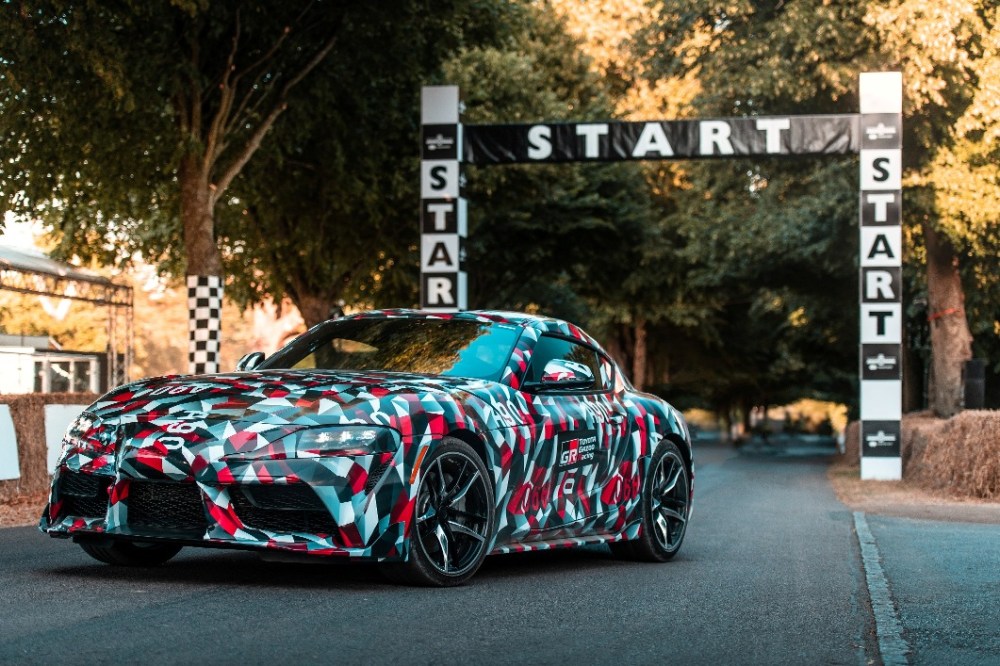 With the Supra’s Chief Engineer Testuya Tada and Dutch racer Herwig Daenens behind the wheel, the prototype will be presented to the crowds on every day of the Goodwood Festival of Speed. Being a prototype, the drivers aren’t exactly gunning it that much. Again, no complaints. We got what we came for. Anything to help us through the painful wait for the car’s global launch which is expected to happen next year.

The new Toyota Supra will share its underpinnings with the 2019 BMW Z4. Platform-sharing is indeed a sensible way of making cars these days.

While the colors of the Toyota Gazoo Racing brand, concealed the visual splendor of the sports car, Toyota continued its nature of being stingy about the rest of the details pertaining to their upcoming badass tarmac-scorcher. We do know that it’s going to be powered by a BMW-sourced in-line six cylinder turbocharged engine though, which will pack around 335 hp of power and 369 lb-ft of torque.

And we love that part about sticking to the old code, as the first four generations of the Toyota Supra had in-line sixes underneath the hood. Great to see the new generation holding up the family values.