The forgotten social experiment known as the Aston Martin Cygnet has made a comeback of sorts at Goodwood with a mighty V8 powering its tiny form.

Back in 2013, Aston Martin decided to pull the plug on the Cygnet, a rebadged Toyota IQ which they thought might appeal to a bunch of rich chaps who never really wanted a tiny Aston Martin in the first place. Long story short, the sales chart wasn’t worthy of being presented. The Aston Martin Cygnet was a disaster worse than even Roland Emmerich could cook up in expensive CGI on the big screen.

Fast forward to 2018 and ‘Q by Aston Martin’ – Commission service was asked by a customer to make a one-off Aston Martin Cygnet. This one had to be the wildest Cygnet on the planet. Aston Martin’s mad scientists went ahead and made it happen. And it showed up at Goodwood Festival of Speed to let the world know of its existence.

Scroll down to take a look at the tiny little demon unleashed from the depths of hell. Gone is its puny demeanour and tiny engine. The 1.3-liter, 97 hp excuse has been thrown out. In its place is a massive 4.7-liter V8 taken from the engine bay of the old Aston Martin Vantage S. 430 hp and loads of torque at your disposal will ensure that this superlight, super-small car will shoot off to 62 mph from a standstill in 4.2 seconds. Top speed? 170 mph. 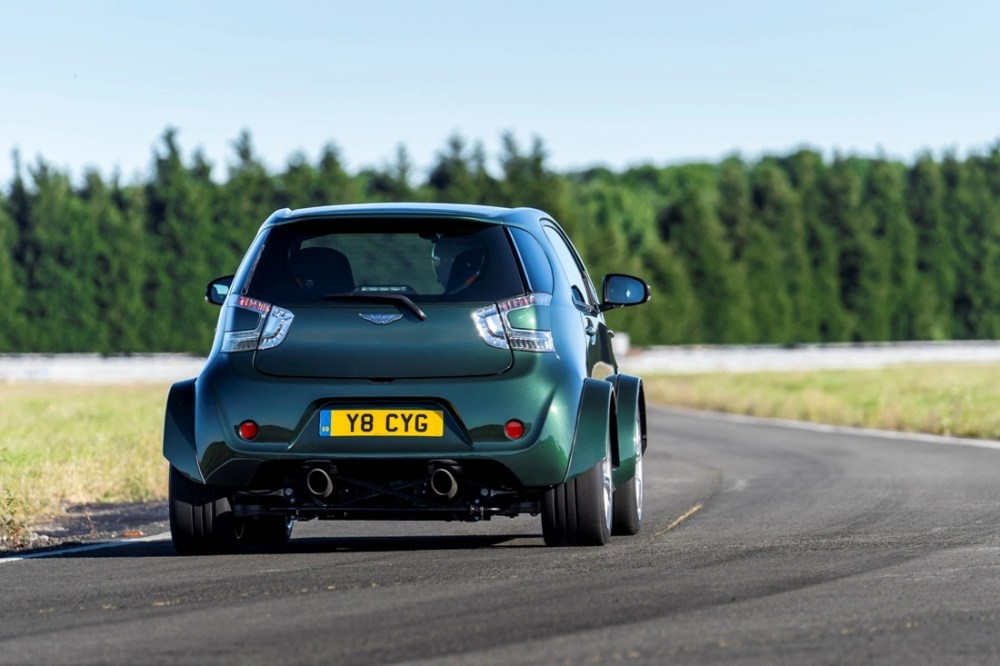 Power is delivered to the rear wheels of the Aston Martin V8 Cygnet via the Vantage’s 7-speed transmission which is now the proud owner of a shorter driveshaft.

There are a host of mechanical changes which had to be executed because of the bonkers idea to shoehorn a dragon’s heart inside a rabbit’s body – twin exhausts, independent double wishbone front and rear suspension, upgraded brakes with six-piston monoblock callipers, 19-inch alloy wheels, flared wheel arches, the works. The interiors too got some cosmetic and functional updates in the form of Recaro seats, carbon-fiber dashboard and a full-blown roll cage.

Taking a look at the video, complete with that wonderful noise which it makes and the way in which it moves about on that hillclimb course, we can’t help but beg Aston Martin to make more of these little demons.