The most loved sports cars on the planet – the iconic Ford Mustang – has crossed the production milestone of 10 million units and the manufacturer celebrates the feat in style.

It has been the most popular, the most loved and the most iconic sports car to ever come out of a production facility. Yep, there may be strong contenders for all those titles from both Europe and Asia. But nothing comes close to the Ford Mustang in terms of being an icon the world over. And now, Ford is celebrating the production of the 10 millionth Mustang. Quite a historic moment this is, we must say.

More than 60 Mustang owners with their cars spread across the various generations of production assembled at Ford’s Dearborn HQ. They drove together as a parade till the Flat Rock Assembly Plant in Michigan where the Mustang is currently made. Photo shoots, enthusiastic exchange of Mustang tales and a flyby performed by World War era P51-Mustang fighters were part of the event. The cars went on to spell out the 10,000,000 record figure on the massive parking lot and thus we have a cool pic on Ford’s social media handles to hit like and share away. 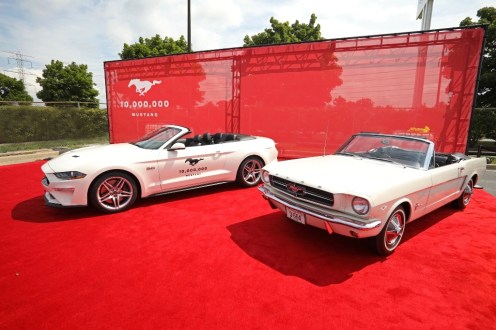 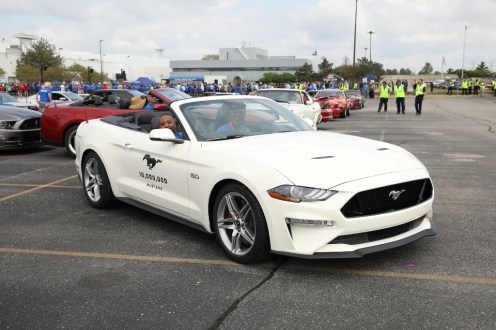 With the aggressive market expansion and the adoption of right-hand-drive, the Ford Mustang is now on sale in 146 countries.

Coming to the 10 millionth car, it’s a 460 hp, 2019 Wimbledon White GT V8 6-speed manual convertible which is the same color and model as the first serialized Ford Mustang ever built. That one bore the serial number VIN 001 and packed a 164 hp V8 mated to a three-speed manual transmission.

From scaring the living daylights out of Sean Connery’s James Bond with its smashing debut in Goldfinger to charging down the streets of San Francisco in Steve McQueen’s Bullitt, the Ford Mustang has always been in the limelight as a popular movie car. And it still continues to be one. It must have got more movie appearances to its credit than any other car.

The original pony car happens to be a sensation on social media too, with its Facebook page having more followers than any other car in the world.