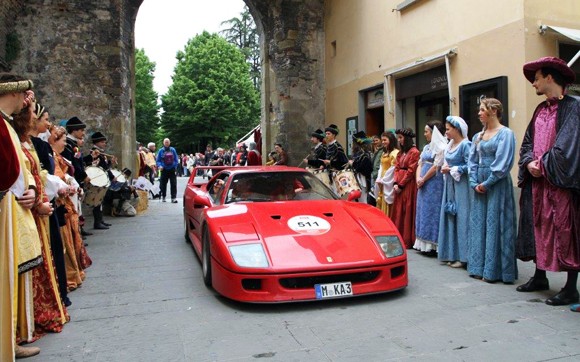 The Mille Miglia is a motoring event of great historic significance. This year’s Ferrari Tribute to Mille Miglia consisted of 20 classic Ferraris and 45 modern sports cars and thoroughbreds from Maranello. Enthusiasts were also treated to the sight and sound of two LaFerraris as they raced along the set route of the 2014 Mille Miglia. On the first day of the race, all the cars took part in a parade in Brescia before taking to the road en route to their next parade event at Verona. The cavalcade passed through small Italian hamlets and the occasional towns with castles and Roman architecture. All along the route, fans flocked to witness the convoy of Maranello machinery in action.

British car makers Jaguar also took part in this year’s Mille Miglia as Jaguar Heritage Race Team. Aboard was supercar enthusiast Shmee150 and a few journalists. Shmee150 has capture some fine videos of the Ferraris and all the action from the 2014 Mille Miglia in general. Seldom do you see such a large number of Ferraris as the Mille Miglia. Starting with historic Ferraris to the 512 Testarossa and F40. More modern Ferraris like the F430 and F430 Scuderia also joined the race and so did a large number of 458 Italias, 458 Spiders. A few 599 GTOs and Enzos were also spotted along the way. Quite a few 458 Speciale models and also took part in this year’s Ferrari Tribute.