Every year Luxury Lifestyle outlet Robb Report organizes a Car of the Year event where editors from the magazine select 13 of the best sports and luxury vehicles to be judged by a group of readers. This year’s event however ended up tragically after more than five people and two cars including an 812 Superfast got wrecked in two separate accidents.

Both the crashes happened somewhere around Napa Valley in California where the event was organized. In the first incident, which was reported by Frederick Bayles on Instagram, a red Ferrari 812 Superfast collided head-on with a tree at a vineyard in Napa Valley. The car had a black license plate with the Robb Report logo on it. As you can see in the clip below, the collision seems to be a serious one but no more details have been divulged. The condition of the occupants is also unknown. 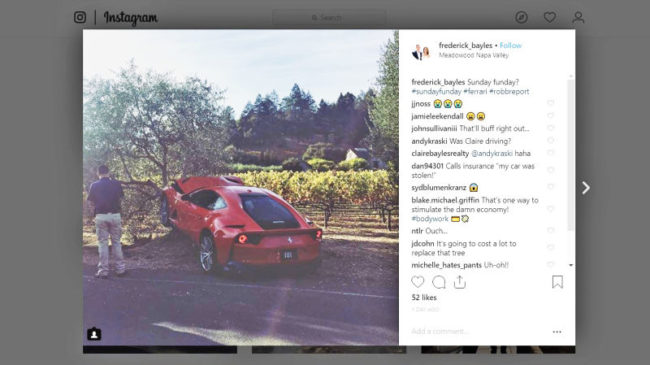 In the second, more serious accident at the same event, a vehicle which the police describes as a “2018 Ford” collided head-on with a Honda on Highway 128 (about 20 miles north of the event). Five people including three who were senior executives at the magazine and were probably acting as judges and two occupants of the Honda sustained major injuries. At least one of them had to be airlifted to the hospital. The California Highway Patrol posted the following video on Saturday.

A Twitter user who claims to have witnessed the participating supercars had something to say about their driving behavior.

The @RobbReport Supercar drivers at Meadowood this weekend should adopt. I was cycling on the trail and have never seen such craziness. Easy to track the vehicles…they all had RR license plates. @CHP_Napa Next year get a room (or track day)!

The current status of the five involved is currently unknown.