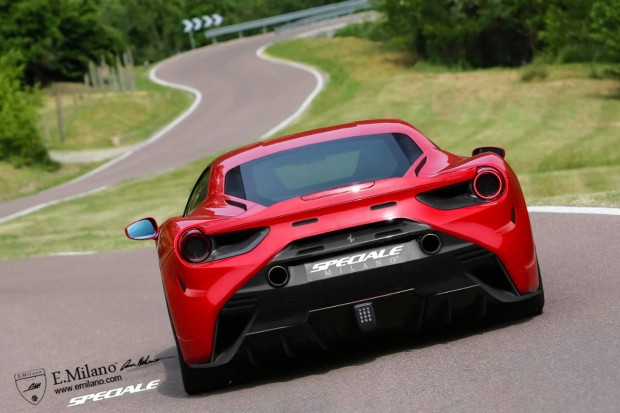 The Ferrari 488 GTB has not even reached showrooms and already people have starting thinking about a 488 Speciale version. The first digital renderings of the Speciale are out and they look quite promising.

Ferrari has shifted to a twin-turbo V8 engine on the 488 GTB. The naturally aspirated V8 in the 458 was probably the best V8 Ferrari had ever produced. But, according to automotive critics, the new 488 GTB’s force-fed V8 does make up for the lack of response with a monumental increase in overall output.

The Ferrari 488 GTB’s 3.9-liter twin-turbo V8 makes 670 hp and feels great to drive. The way the engine delivers the punch is different compared to a naturally aspirated motor, but it maintains the Ferrari promise of super-quick steering and a sublime chassis. Like the 458, the new 488 GTB is quick on its feet, agile and responsive. We wonder how good a 488 Speciale would be.