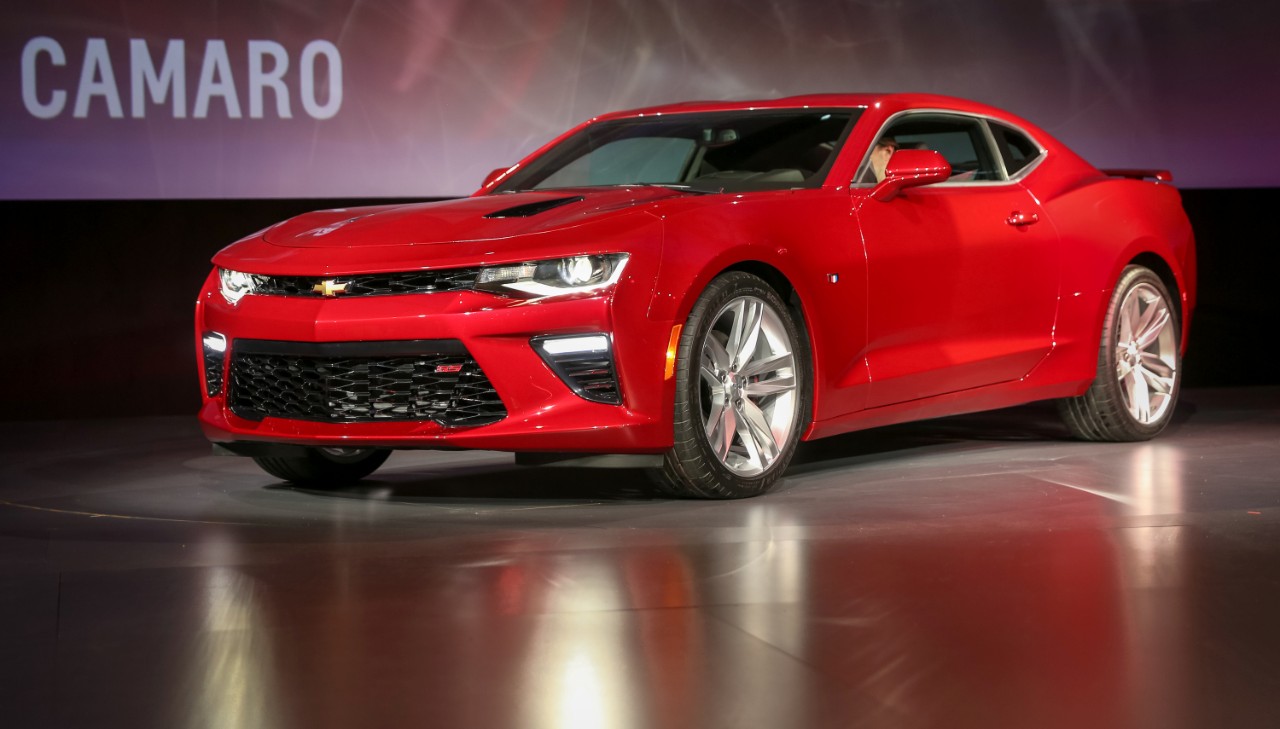 GM has taken the wraps off the 2016 Chevrolet Camaro following a month long teaser campaign. The lightweight and more powerful Camaro is the sixth generation model and its biggest rival is the Ford Mustang, which too in its fifth generation has lost a few pounds. The #CamaroSix is based around an all-new Alpha platform that’s lighter than the outgoing model.

The styling has been thoroughly revised which now gives the new Camaro a chiseled, mean look. New engines and transmissions also make their debut on the sixth-generation Camaro, among which is a four-cylinder turbo unit as well. Then, there will also be the V8 powered versions and ZL1 and Z/28 packages for those inclined towards more performance.

2016 Chevrolet Camaro has a wheelbase 2″ shorter than its predecessor and an overall length that’s equally cut down. It retains the basic exterior look of the Camaro from the previous generation but with a lot of extra bits that give it fresh new look. Unlike the 2015 Ford Mustang, the Camaro does not look like its gone on a diet though. That’s more to do with the characteristic slab side profile.

Chevrolet has released the Camaro SS and Camaro RS models on launch. Both versions get LED treatment up front, a wider lower grille, contoured hood with vents, new tail lamps and rear bumper. The interior is an improvement over the previous model though. An almost vertical dash with a large LCD display in the center greets you once you step inside. The twin-pod cluster has been merged into a single unit and now sports clear, ergonomic dials. Designers have given the new Camaro interior multi-color LED signature lighting- a first on the Camaro.

The new Camaro also gets various electronic features including a Drive Mode Selector: Snow/Ice, Tour, Sport and – on SS models – Track settings. The 2.0-liter Turbo equipped Camaro is the most fuel-efficient Camaro ever made, while the V6 version, for the first time gets cylinder deactivation technology. Both these engines can be had with a 6-speed manual or an all-new Hydra-Matic 8-speed automatic with paddle-shift. The 2.0-liter model features active noise cancellation for improved cabin comfort.

The LT1 V8 comes with a six-speed stick-shift as standard and also featured Active-Rev Match for better downshifts. An automatic transmission is also available as an option with the V8 motor. For a more exhilarating driving experience, the V8 exhaust has been fitted with resonators for better induction noise. The exhaust itself features electronically controlled valves that deliver optimal performance and improved sound levels.

2016 Camaro has been leaked! AutoGuide has shared screen grabs from a CNBC exclusive revealing the sixth generation Camaro. The official launch of the car is scheduled for May 16, 2015.

Clearly, #CamaroSix is gunning for #2015Mustang. The Gen-6 Chevrolet Camaro is slowly taking shape as we move towards the scheduled launch date of May 16. GM doesn’t want to show the car yet and hence has continued on its teaser campaign. The latest image set released by the company gives us a hint of a functional exterior with a rear-end spoiler, redesigned tail lamp graphics, sculpted hood, engine bay and composite suspension assemblies.

GM Design Chief Ed Welburn has also revealed some details about the upcoming Camaro. He said,

“The Camaro went to the gym and came out with a lithe, more athletic physique for the sixth generation,” Welburn explained. “It’s a more expressive evolution of the Camaro’s iconic character—and one that complements its leaner size and sharper reflexes.”

He also pointed out to the new Alpha platform which makes the Gen-6 Camaro 200 pounds lighter than its predecessor. That said, stiffness of the chassis has gone up by 28 percent. All of these changes are all steps in the right direction and might give us a Camaro that is sharper and engaging to drive.

GM has released a couple of new images of the upcoming Chevrolet Camaro. No, it’s not the whole car. This time GM wants us to checkout the 6.2-liter LT1 V8 that will power the Camaro. This is the same engine from the C7 Corvette and should make for a rather interesting drive. Tire smoke? Hell yeah! Furthermore, the V8 soundtrack would be amplified by a set of dual exhaust pipes sticking out of the back side.

General Motors has announced that the 2016 Chevrolet Camaro will be launched on May 16, 2015. The venue selected for the event is Belle Isle Grand Prix course at Detroit, MI. The all-new Camaro will be the sixth generation model and the official Twitter hashtag is #CamaroSix. A dedicated website has also been launched- TheCamaroSix.com. GM also plans to host previous Camaro owners. All previous generation Camaros will also be on display. Meanwhile, fans will be offered hot laps around Belle Isle in a 2015 Z/28 Camaro. Check out the V8 engine note of the new Camaro below.

[Mar 14, 2015] Chevrolet Camaro Gen-5 sales have reached a new milestone. The company has sold 500,000 units of the pure American muscle car and there’s more good news for Camaro fans. Chevrolet will soon launch the sixth generation Camaro in the United States and has recently released a teaser video. The Gen-6 Chevy Camaro is expected to be a evolution of the current model. One of the distinctive features on the exterior will be a double-bubble roof and an overall meaner look.

The 2016 Chevrolet Camaro will also spawn a couple of high performance models like the Z/28 and the ZL1. All we can say at the moment is that it will be powered by a V8 engine tuned for better performance and improved fuel efficiency. Chevrolet is also expected to tweak the aerodynamics of the car in order to better fuel mileage. Lowering CO2 emissions would also be on the agenda. While we still await for more information to dribble out, enjoy the teaser video in meantime.