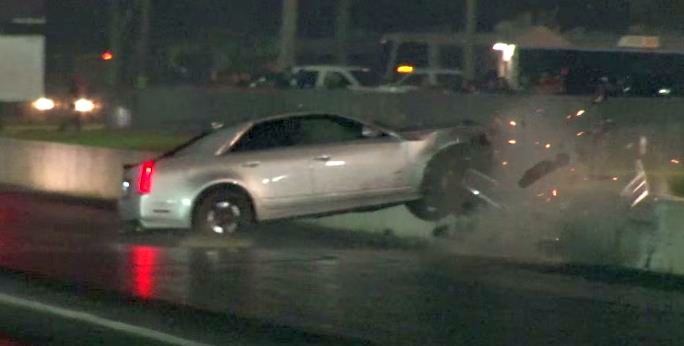 This owner of a Cadillac CTS-V won’t be too happy with himself after he crashed his V8 powered Cadillac CTS-V sedan at a drag strip. Well, the competition was certainly fierce with a highly tuned Pontiac Firebird lining up alongside.

The Pontiac proved a bit too much for the CTS-V but nobody saw what was coming next. The Cadillac had a slow start but got on well once the rear tires found some traction. However, just a few meters off the line, the CTS-V’s driver lost control and swerved wildly to the right. By that time, the Pontiac was well ahead. The Cadillac however jumped the center line and into the concrete barriers. The impact was so hard the concrete slabs suffered major damage and so did the business end of the CTS-V.

Click here to read more about the 2016 Cadillac CTS-V.