You know it’s a big fat Indian wedding when the wedding car is Brabus G63 AMG 6X6. This particular monster was imported into country a while ago.

Not sure whether it stayed back in India, but it was most probably sent back to the UK soon after the event. The photos posted on a forum thread show the behemoth roaming the streets of Mumbai.

It was accompanied by a Mercedes-Benz G63 AMG which looks rather tiny in front of the Brabus G63 AMG 6X6. As far as wedding cars go, this is probably the most insane out there. Wonder how much it costs to rent one these?

It’s not something you and I could afford but that means the person who imported it for his wedding surely has deep pockets. 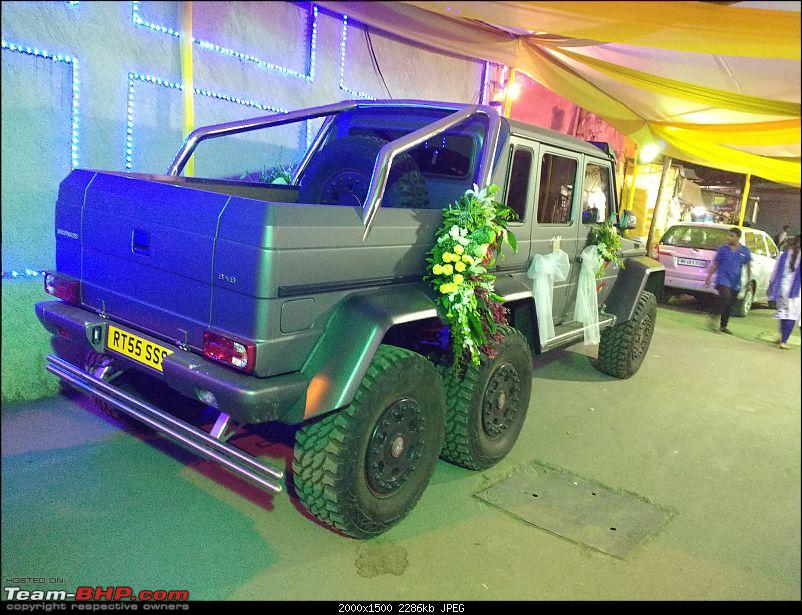 It is based on the Mercedes-Benz G63 AMG 6X6 of course. German tuning house Brabus then extract a bit more power from the 5.5-liter twin-turbo V8. The engine in this 6-wheel drive monster truck produces 700 hp and 708 lb-ft of torque. It comes courtesy of Brabus’ G63S-700 performance kit.

Brabus also add a few other bits to the G63 AMG 6X6 which makes it stand out from the factory version which gets a measly 544 hp. It’s the perfect machine for dune bashing if you’re a wealthy sheikh. It weighs in at 8487 pounds, yet sprints from 0-60 mph in 7.4 sec.