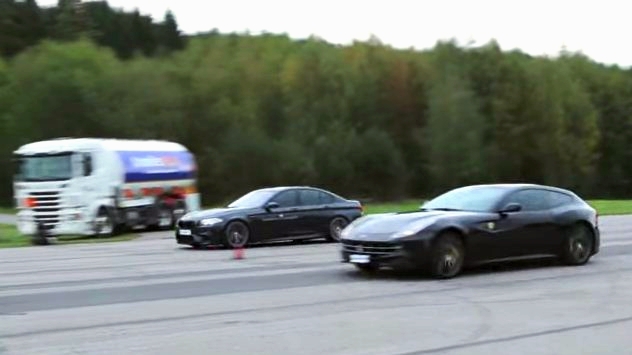 A BMW M5 F10 took on a Ferrari FF in a drag battle on a disused runaway in Sweden. The race was staged by GTBoard.com and produced some interesting results.

As per the video, both cars were in stock condition with just an exhaust switch done on the M5. The M5’s 4.4-litre twin-turbocharged V8 puts out 560 bhp in stock, while the Ferrari FF with a V12 bolted in the front had the power advantage. To make things difficult for the Ferrari, it was hauling 3 occupant compared to just 2 in the M5.

After a rolling start. the Ferrari and BMW can be seen going neck and neck until the point where the BMW M5 starts pulling out a lead before hitting the speed limiter at 250 kph. That’s when the Ferrari FF takes over. But, how did the BMW M5 do that?  Watch the video below.