There are so many sports cars on the market, from the Mercedes-AMG C63 to the Lotus Elise. They really are perfect car for car-lovers who can’t afford a supercar. Nowadays, sports cars are becoming increasingly popular in today’s society. The BMW M2 is one the latest in the line of small, affordable yet exciting sports cars. But how does it compare to it’s rival: the Porsche 718 Cayman S? 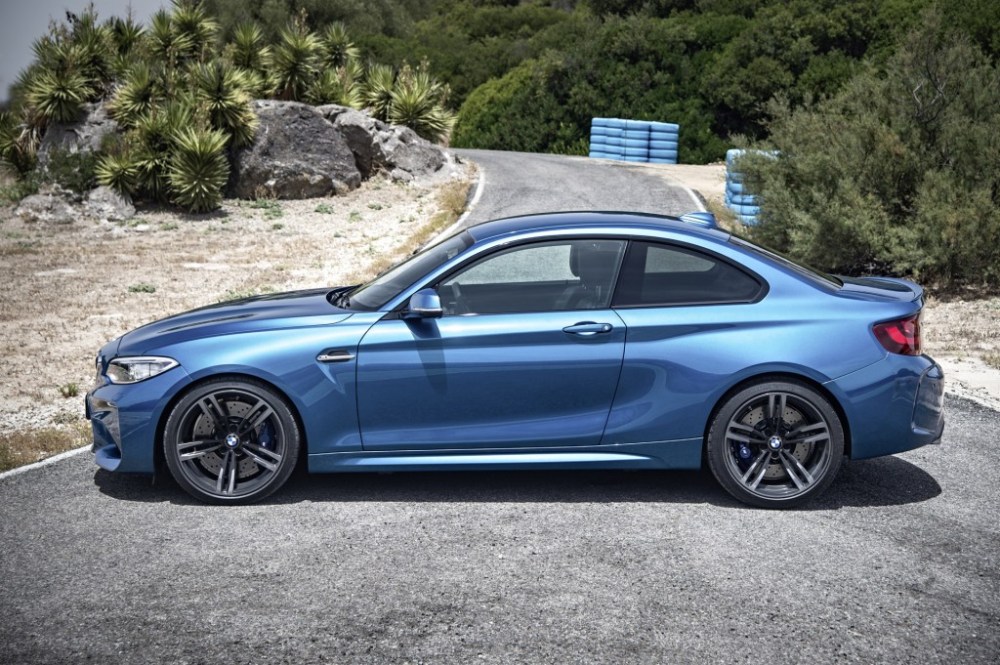 Established automotive manufacturer, BMW, offers many types of cars. But more particularly, they produce mean, aggressive performance cars identified by a single letter: M; derived from “Motorsport”. Nowadays, only higher trimmed, higher specced BMW models receive the M badge. Furthermore, all BMW M Series vehicles are tested at BMW’s private facility at the Nürburgring racing circuit in Germany causing the sports heritage not to be lost. But there is one model that we’re particularly interested in… The M2!

The M2 is a fairly small car, measuring around 4.5 m in length. However, this does not limit it’s aggressiveness or capability. I think, the exterior of the M2 is stunning! It’s no surprise that from the front we can see the BMW dual kidney grille. In addition, on the M2 it is finished in a high-gloss black with a chrome rim. Just below lies another fierce black vent found between sharp air intakes.

Furthermore, as a whole the front bumper looks fantastically mean! The M2 features a traditional BMW hood with dips and peaks. At the rear of the vehicle, four exhaust pipes sit beneath the large, accented rear bumper. Although the M2 doesn’t feature a rear wing, there is a little lip spoiler that portrays the sports styling of the M Series. The BMW comes in many colors but I particularly prefer the Long Beach Blue. 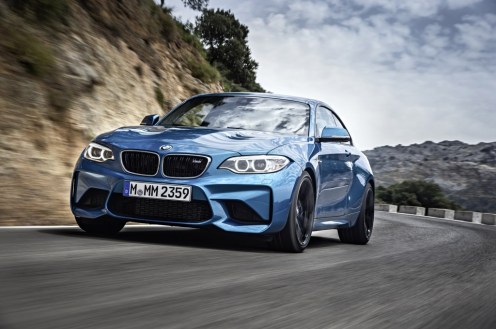 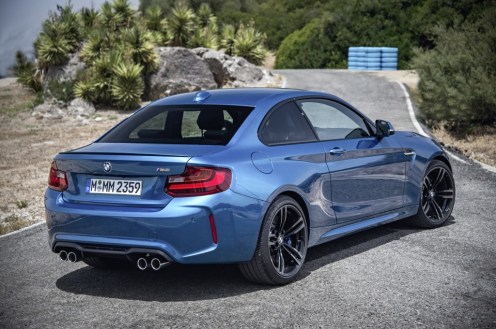 BMW never fails to impress in the interior department- so you know what to expect with the M2! Firstly, this BMW features a round, three-spoke steering wheel with the M badge placed on the leather at the bottom. The dashboard features two large dials and a small electronic screen between. It features a large infotainment display connected to the fantastic iDrive system.

Beneath, you will find all the buttons and controls, from air-conditioning to the volume wheel. Furthermore, the leather seats beautifully portray the M Series emblem at the top of the backrest. Personally, I think the M2 has a fabulous interior! I particularly like the dashboard due to it’s discreteness and simplicity. 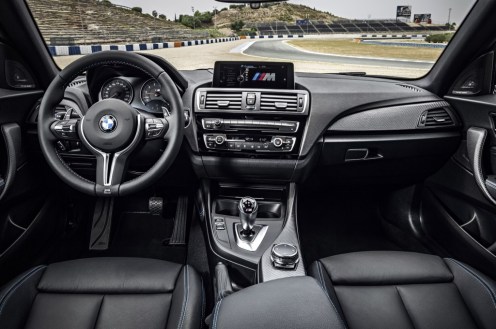 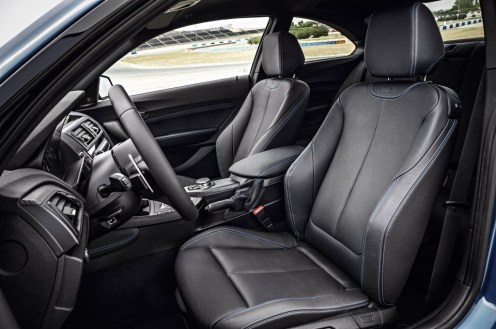 The M2 mechanics are just as spectacular as the aesthetics! It uses a 3.0-liter 365 hp turbocharged flat-six that no doubt produces high performance statistics! Moreover, the sports car reaches 60 mph in just 4.0 seconds and can accelerate all the way to 163 mph! It’s an excellent drift machine and has been appreciated by car critics and enthusiasts. So overall this automobile has reached the peak of fun! BMW haven’t been too pushy with the price of this car either: the starting price is $51,700. 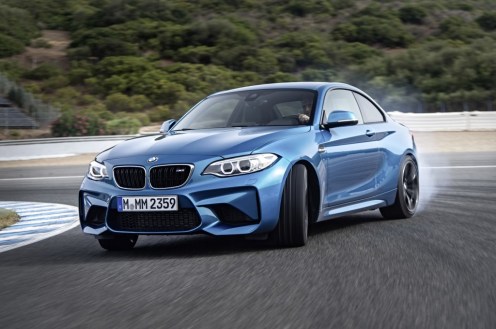 Conclusively, I think BMW have perfected the M2 and for that reason it is my favorite M Series BMW to date. I think the M2 looks amazing due it’s accents and curves. The interior provides everything you need, and it does it in a sporty style! BMW have given customers a competitively priced package for the spectacular car it is. Overall, I just love the M2 for it’s sporty, aggressive styling and impressive driving manners. As well as that, the M2 is a usable daily driver, unlike some of it’s rivals. 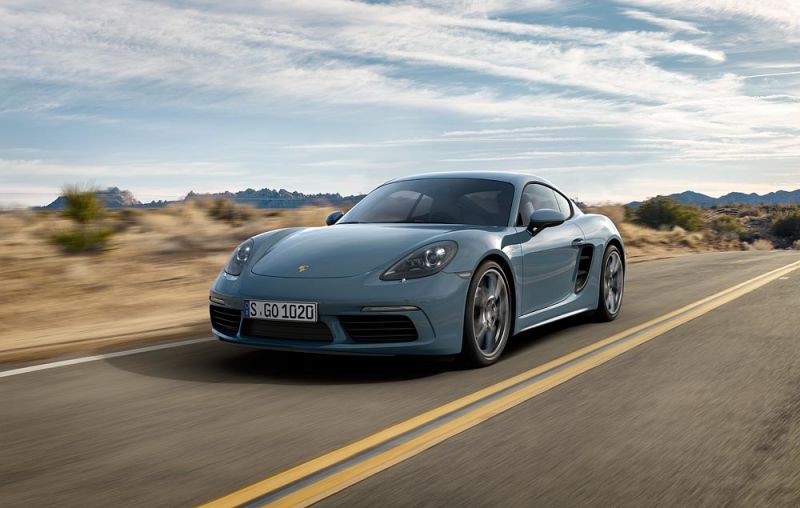 This year, Porsche made a big change to their lineup of cars. The German brand revealed the new 718. So, Porsche have brought the Cayman and the Boxster together to form one line of car. Moreover, this means that the Boxster is now just a convertible Cayman. Now that they have done this, the Boxster has been priced higher than the Cayman, which makes more sense considering a cabriolet roof will cost more to manufacture. The 718 currently comes in four different variants: Cayman, Cayman S, Boxter and Boxster S. The model that we’re interested in is the 718 Cayman S!

The front-end of the 718 Cayman S to me looks very delicate with the smooth curves and few accents. In addition, the 718 front bumper is body-coloured and features two air intake vents with horizontal slats. The bumper features a small matte black extension just beneath it that gives it a bit more of an aggressive and sporty look. The rear of the Cayman is truly beautiful! Between to the lights you’ll find a black bar with the Porsche lettering placed onto it. The matte black back bumper holds the twin exhaust pipes.

In addition, two exhaust pipes are mounted closely together in the centre of the bumper (a very well known feature of the Cayman). The 718 comes in a large variety of typical Porsche colours, ranging from GT Silver to Lava Orange. Moreover, my particular favorite for the 718 Cayman is Miami Blue as it suits the delicate look of the car but gives the bright stand-out attention a Porsche needs. 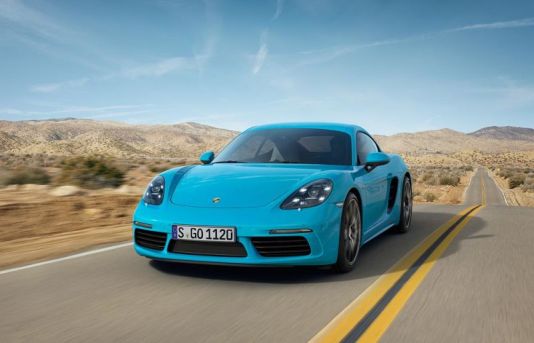 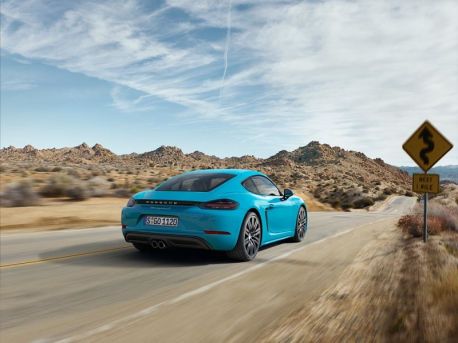 It’s a similar story with the interior. The 718 Cayman interior is outstanding! Firstly, the 718 uses a three-spoke steering wheel finished beautifully with aluminium panels for the controls. Additionally, the dashboard uses three circular sections with the centre piece overlapping the outer two. In true Porsche tradition, the central dial houses the rev counter, speedometer on the left and an driver-info display on the right.

A large infotainment display is found as we move towards the centre of the cockpit. As well as this, buttons and controls are found in a linear pattern down the centre console, a classic feature of a Porsche. The 718 seats come in a range of colors just like the exterior. Furthermore, I personally like full black leather for Porsche interior as I think it looks sporty and luxurious. 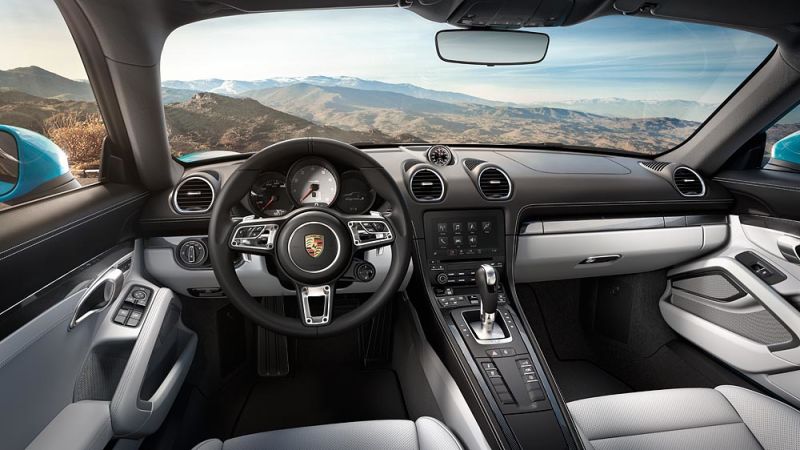 The new 718 Cayman S is equipped with a 2.5-liter turbocharged flat-four engine. It produces 350 hp which results in a 0-62 mph time of 4.6 seconds and a maximum speed of 177 mph. The 718 Cayman S comes standard with Porsche’s manual transmission.

However, Porsche obviously allow dual-clutch PDK to be an option – I would definitely be getting PDK! The all-new 718 Cayman S isn’t nice to the wallet: It’s priced at $66,300. In my opinion, $66K for a recognized, classic, Porsche sports car is a fair price. However, when comparing it to it’s rivals, it may seem a bit high. 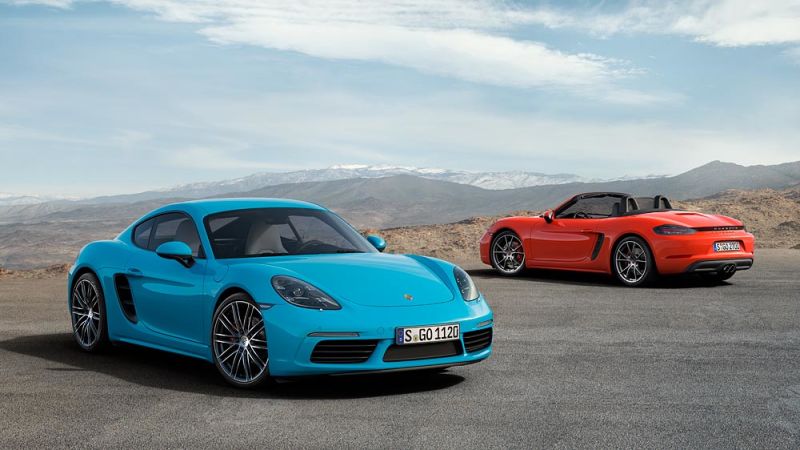 Conclusively for the Cayman, I think it is a wonderful and beautifully designed car. Every ounce of thought has gone into making the 718, especially considering the previous 981 was such a seller. Porsche never fail to deliver with exterior or interior and always seem to make it a luxurious piece of art. Performance from the new turbo-4 engine is on par with its rivals however the sweet sounding 6-pot is sorely missed. 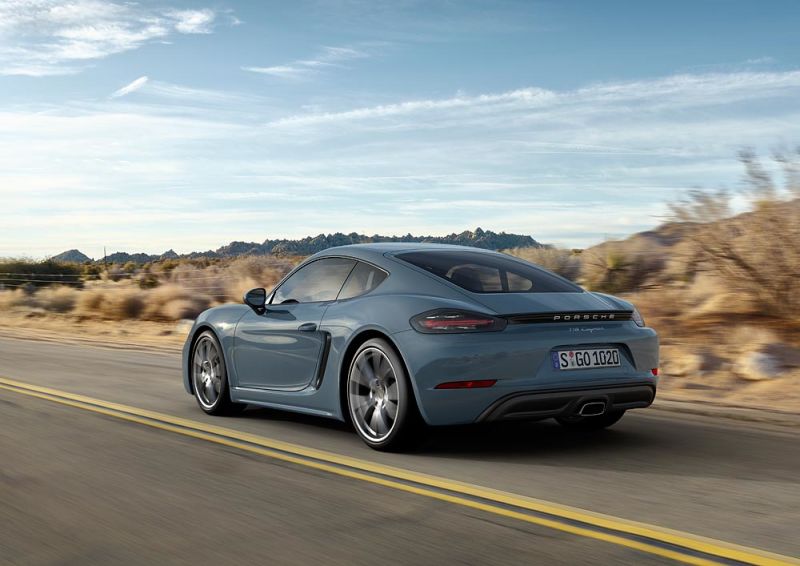 So, when comparing the M2 and 718 we have a lot to consider! For me, there are three main deciding factors: exterior, interior, performance. Firstly, the exterior: the BMW holds a more aggressive sporty look whereas the 718 provides a more relaxing and smooth look. Henceforth, I think the M2 has the edge with the exterior, however, many will prefer the looks of the Cayman.

The interior is another key feature when comparing two cars. I myself believe that without a doubt the Porsche has the better interior. That’s decided on terms of luxuriousness, sportiness and practicality! Finally, overall the M2 has the better performance due to it’s faster 0-60 time and it’s ability to drift so easily adding to the fun factor. On the other hand, the Porsche has a higher top speed – but would the extra 14 mph really matter in the real world? No. I think the M2 is the better sports car due to it’s mean looks and better usable-performance. Having said that, what really decided it for me was the exterior. I absolutely adore the looks of the M2 from front to rear and personally don’t think BMW could have done a better job! This does not mean however that the Porsche doesn’t look good because it really does, and anyone who is lucky enough to own one should be very very proud! 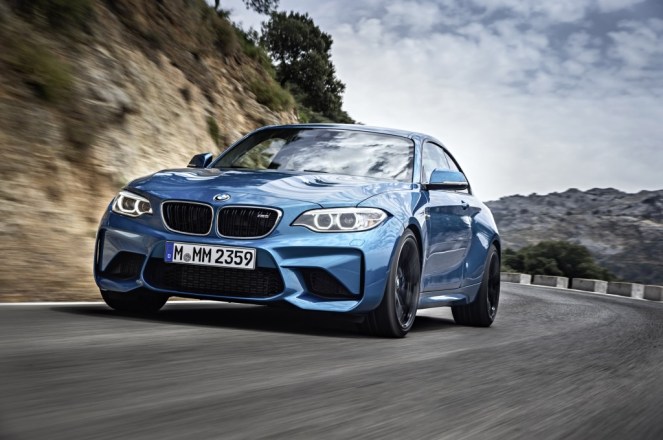 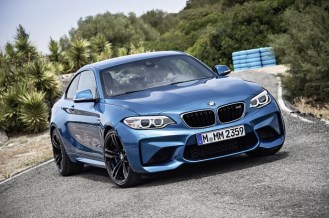 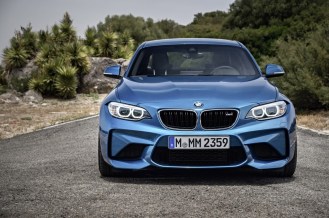 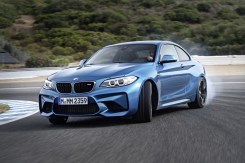 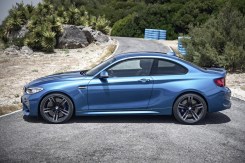 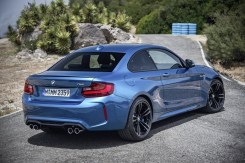 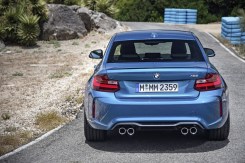 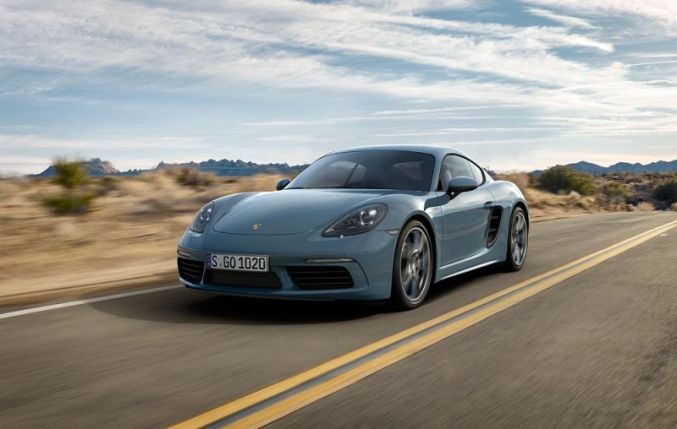 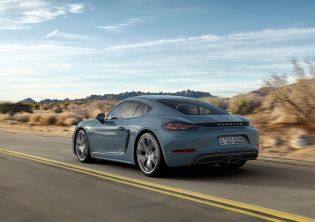 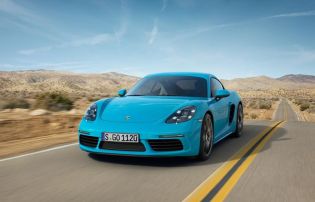 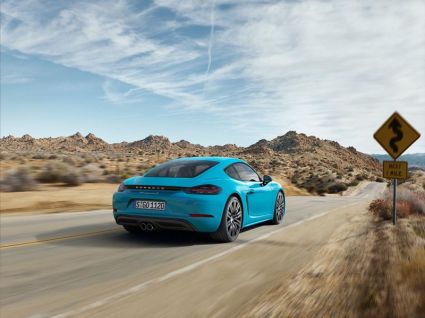 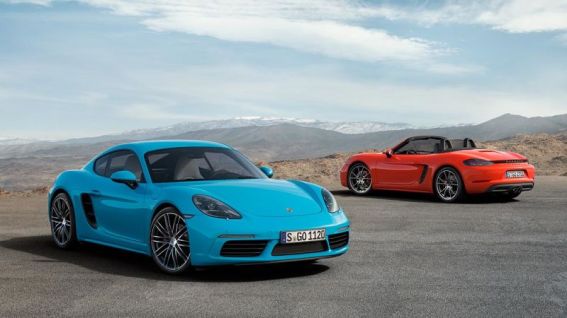 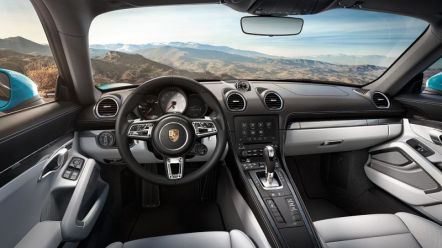