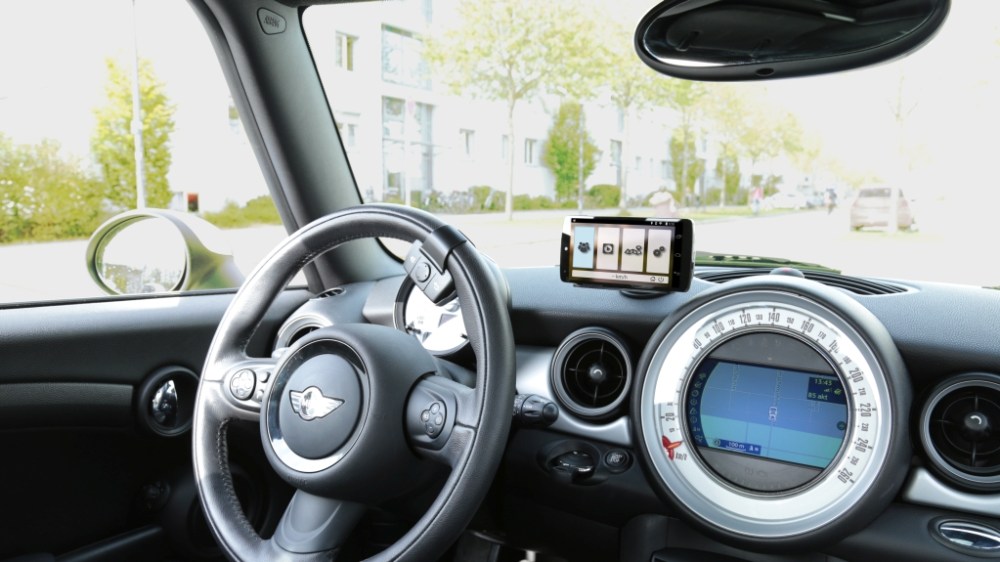 Mobile phones have become an integral part of everyday life. Perhaps, what is most dangerous is the fact that people engrossed in their day to day life tend to use mobile phones even while driving. One of the major causes of road accidents are due to driver’s multi-tasking while at the wheel. Now, modern car do come with Bluetooth integration for your mobile phone. However, this feature is only available on high-end models and newer cars. So, what if you own a car that hasn’t got a system that connects to your phone?

This company in Germany might just have the answer. ‘App Your Car’ a system that allow easy and safe use of smartphones while driving. A small remote control connects to your in-car multimedia system to offer all the features as a modern EOM system. It also comes with a mounting for your smartphone which can be recharged wirelessly- that’s a neat feature! Read on to find out more about this must have gadget and please don’t forget to support the company.

New system allows easy and safe use of smartphones while driving

The dangers of mobile phone use have been shown in numerous studies and police records over the past years. Nevertheless, especially younger people are accustomed to constantly use their smartphones, which is why they find it hard to let go of them, even when driving.

Four young German entrepreneurs now developed a solution, which grants an easy and safe way to use Android smartphones while driving: a small remote control – called “Wireless Bluetooth Controller“ – which can be clipped onto any steering wheel, combined with a smartphone mounting that can be placed on the dashboard and charges the phone wirelessly.

The two brothers Harald and Antonius Dalezios came up with the idea about a year ago: “We were asking ourselves whether there might be an alternative or maybe even better solution to the already existing, expensive car makers’ infotainment-systems, which can cost up to several thousand Euros. That’s how we got the idea of simply using the smartphone itself as a display, while navigating it with a Bluetooth controller“, says Antonius Dalezios.

What separates this solution named “App Your Car“ from all other currently existing systems is not only the possibility to listen to your music, make phone calls, google or let SMS be read out loud, but also to use the owner’s favorite apps such as Whatsapp, Skype, Calendar or e-mail – and all without having to take the eyes off the road or the hands off the steering wheel.

“As soon as we told our two colleagues about ‘App Your Car’ they were thrilled by the idea and we all started tinkering, programming, ordered a 3D-printer and filed a patent. After one year of hard work we are now holding a working prototype in our hands and are ready to start with production“, says Antonius Dalezios.

“App Your Car“ can be pre-ordered starting on November 24th through a worldwide crowdfunding campaign on the website www.indiegogo.com for a discounted price starting at 99 Dollars. Further on, the package consisting of a controller, mounting and app will be available for a retail price of 179 Dollars.