Though we saw it already in August this year, the 50th Anniversary Ford Mustang Cobra Jet continues to make drag racers weak at the knees.

Meet the 50th Anniversary Ford Mustang Cobra Jet. A $130,000 machinery built with the sole purpose of destroying competition at a drag strip. It isn’t street-legal, which means you got to limit yourselves to the straight stretch of tarmac on a drag strip to show off the true might of this serpent.

Built to commemorate the 50 years since the first Ford Mustang Cobra Jet rolled out way back in 1968, this modern day version does pack enough fire power to make its rivals upset. At the 2018 SEMA Show, the Cobra Jet will be facing off against the electric drag race eCOPO Camaro concet from Chevrolet and the 1,000 hp Hellephant engine from Mopar. 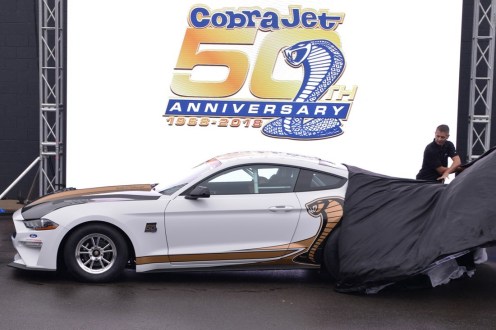 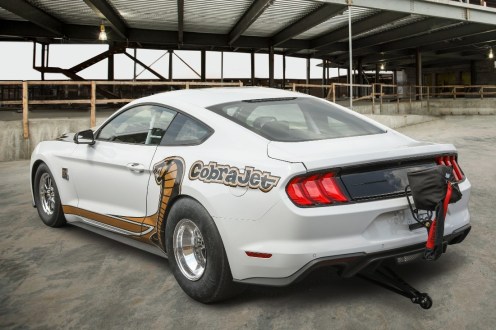 The 2018 Ford Mustang Cobra Jet lives up to its revered predecessors. Quarter mile comes up in 8 seconds and the speedo needle will zip past 150 mph when the snake crosses the mark. That rumbling 5.2-liter supercharged V8 under the hood knows for sure on how to get its paycheck. An NHRA-certified roll cage, FIA-rated seats and a Ford 9-inch solid rear axle makes its intentions clear. This is not meant for the streets in any manner.

Only 68 examples will be made and that number is a nod to the 1968 birth date of original Ford Mustang Cobra Jet. Orders can be made in shades of Race Red or Oxford White and customers have the option to add exclusive 50th Anniversary graphics and badging.

As evident from the video above, this creation from Ford Performance will always be ready to pull a wheelie at the drop of a hat.