The Mercedes-AMG GT Concept was unveiled at the 2017 Geneva Motor Show a while ago. The new four-door super saloon is due in 2019 and will rival the Porsche Panamera Turbo. It is the latest concept to debut as part of Mercedes-AMG’s 50th anniversary celebrations. Later in the year, the car maker is set to unveil the AMG hypercar.

The concept takes inspiration from the AMG GT sports car which is evident in its design. The four-door saloon concept is powered by AMG’s next-generation performance hybrid drivetrain designated by EQ Power+. 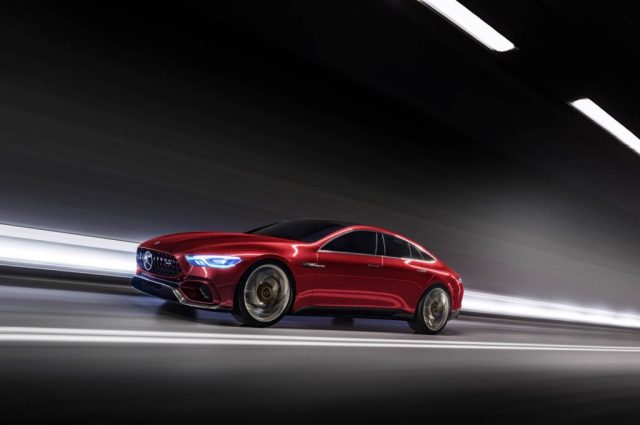 The AMG GT Concept uses a 4.0-liter V8 engine in combination with a high-performance electric motor. The combined output of the system is rated at 805 hp. It can also be driven in pure electric mode with lightweight modular batteries offering impressive electric range. Moreover, the hybrid system propels the vehicle from 0-60 mph in under 3 sec, claims Mercedes-AMG CEO Tobias Moers.

“The GT Concept embodies the most extreme expression of our design idiom and underlines anew the autonomous profile of AMG as a performance brand”, said Gorden Wagener, Chief Design Officer Daimler AG. “Through perfect proportions it creates a puristic design with the emphasis on its surfaces, featuring sensuous shapes and is hot and cool at the same time.” 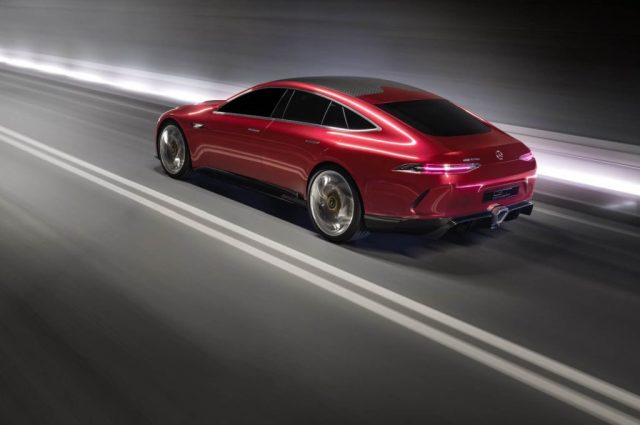 The Panamericana grille features moving shutters in the centre and on the side air intakes. These greatly improve aerodynamic and thermal efficiency. A similar AIRPANEL system is also used on the AMG GT R.

With the AMG GT Concept, Mercedes-AMG has introduced its futuristic “Nano active fiber technology “ for daytime running lights. The headlights are made up of a combination of LEDs and laser lights. 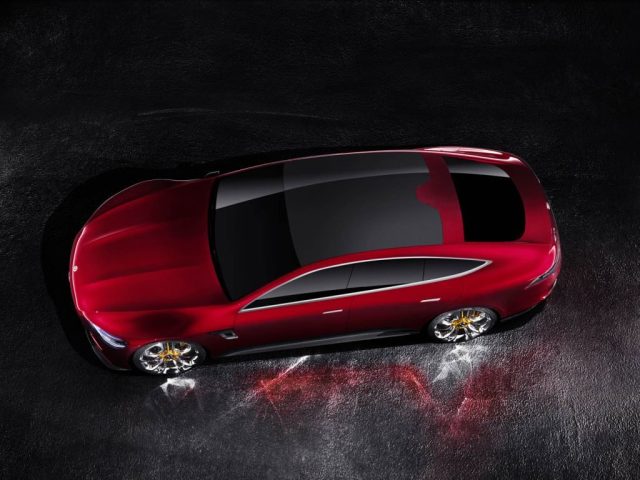 The shape of the four-door coupe is unmistakably AMG GT. The design incorporates several styling elements like pillar-less doors, futuristic tail end with the slim horizontal tail lights reminiscent of the AMG GT. A central tail pipe housed inside a carbon diffuser reminds us of the AMG GT R.

Stylish allow wheels on the AMG GT Concept give a glimpse of the AMG ceramic high-performance compound brake rotors and bronze calipers. 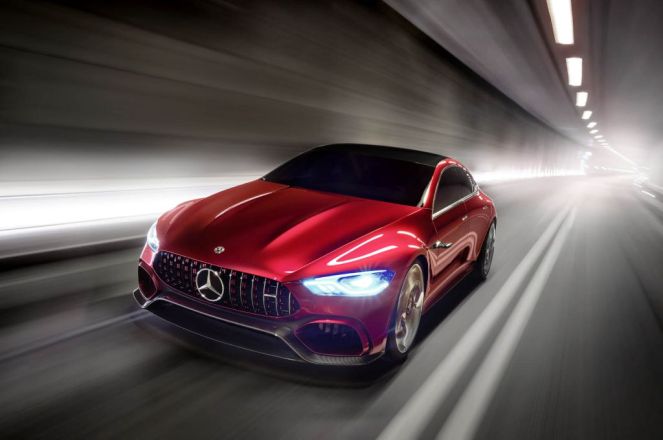 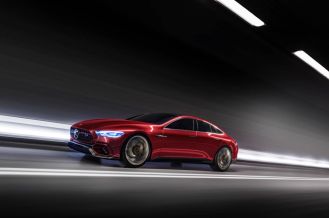 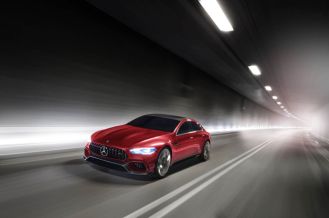 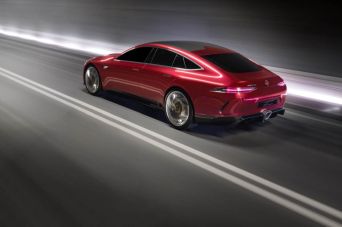 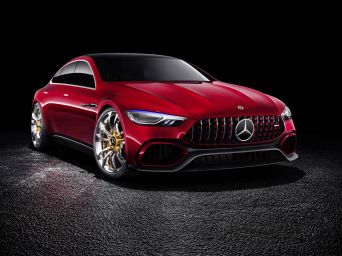 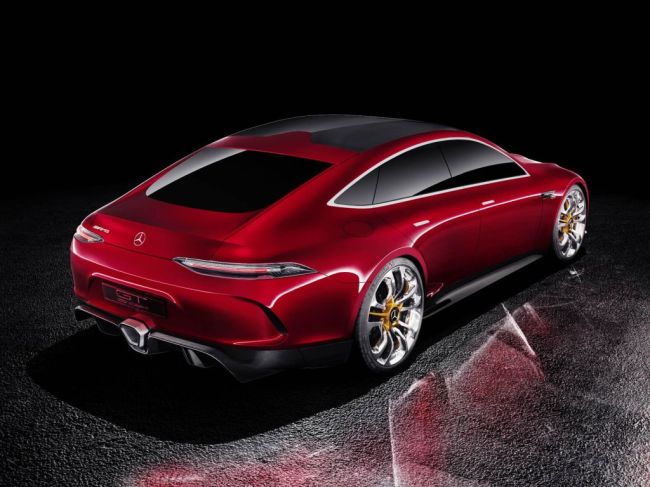 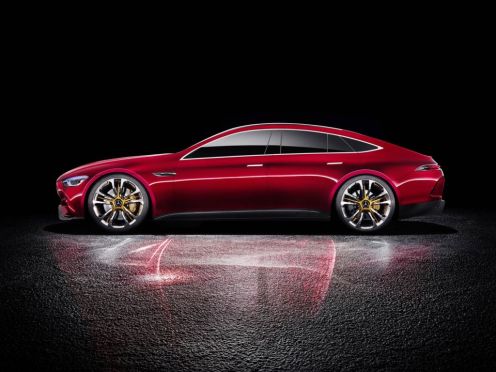 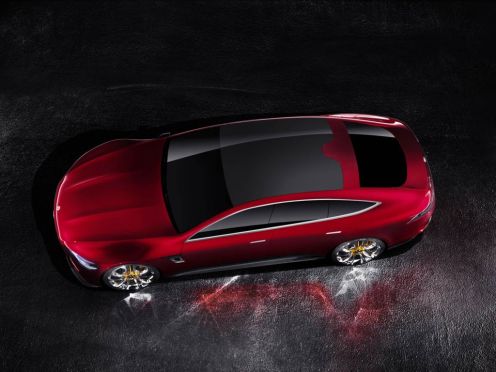 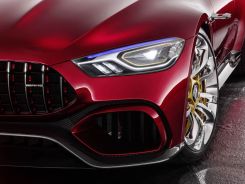 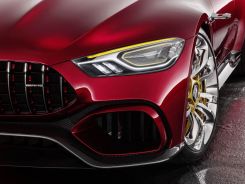 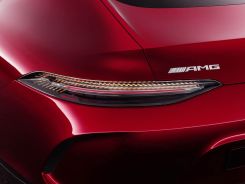 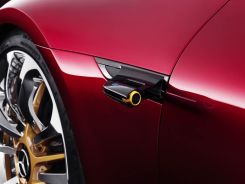 The Mercedes-AMG GT concept will be a four-door sedan based on Mercedes’ modular rear architecture (MRA). It is the same platform that underpins the AMG C63, E63 and the more luxurious S63.

It is the brainchild of AMG head honcho Tobias Moers who has envisioned a four-door saloon that will replace the CLS Shooting Brake. Codenamed X290, the AMG GT concept will be the third bespoke model in AMG’s line up. Another car that’s currently under development is the AMG R50 hypercar. 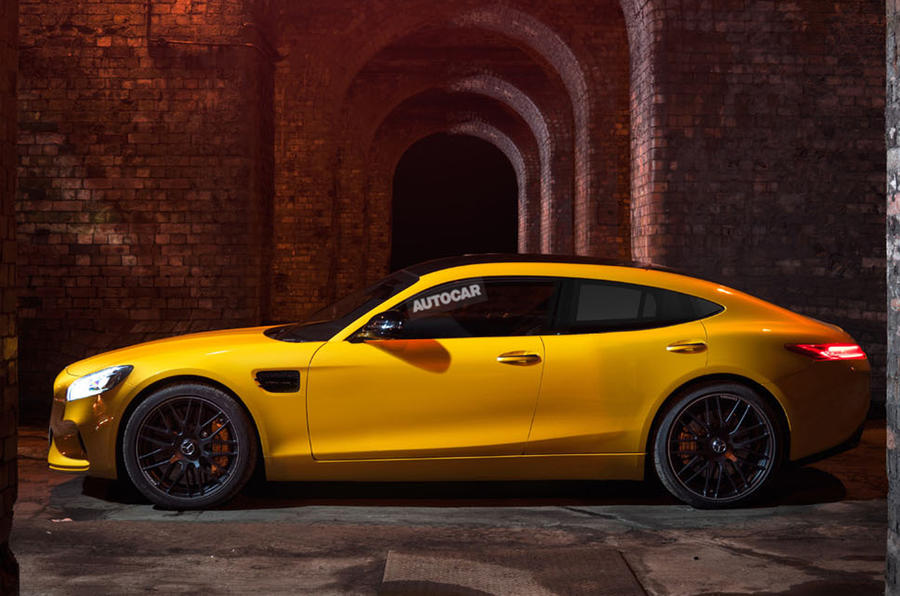 Powering the new super-saloon will be AMG’s 4.0-liter twin-turbo V8 engine. Much like the other AMG models, the AMG GT4 will also be available in two variants. The AMG GT S is expected to receive a tuned version of the V8 with close to 603 hp.

Further performance boost will be provided thanks to an integrated starter generation (ISG). The system comprising of an electric motor bolted within the transmission will provide a 20 hp boost over a short duration.

Moreover, the latest generation of AMG’s Speedshift MCT automatic gearbox will be on offer coupled to a 4Matic four-wheel drive system capable of sending 100 percent of the torque to the rear wheels.

A low-end variant of the Mercedes-AMG GT concept might also be in the works. This will apparently be powered by a 3.0-liter turbocharged 6-cylinder engine.

Official details including images of the Mercedes-AMG GT concept will be released soon. So stay tuned!