Gemballa’s latest monstrosity is based on a 911 Turbo 991-Gen. It is called the Gemballa Avalanche which will be revealed at the 2017 Geneva Motor Show.

Well, a 911 Turbo pops out of the Porsche factory as a 547 hp supercar that’s comfortable and can be used for daily commutes. The Gemballa Avalanche takes things a bit further or shall I say to extremes.

For some, the 199 mph Porsche 911 Turbo is pretty adequate. Gemballa thinks otherwise. The Avalanche packs an 820 hp twin-turbo flat-6 cylinder engine. 709 lb-ft torque is enough to mimic the forces of an actual avalanche.

“The Avalanche is an indefinable creation of engine sounds, power and acceleration to blast you across the horizon,” Gemballa explains. 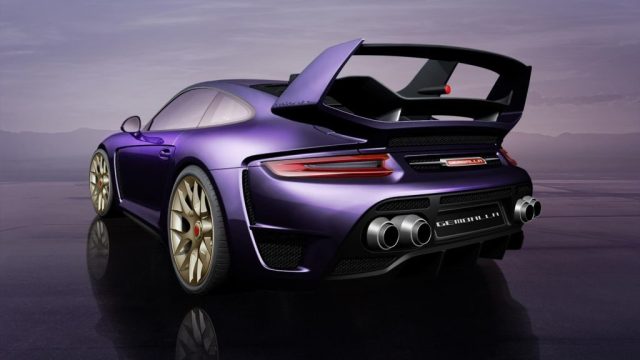 The Gemballa Avalanche is expected to sail past the magical figure of 200 mph. But by how much is the question. The tuners have decided to stay mum about performance numbers for now. However, we expect them to make an announcement at Geneva.

According to Gemballa boss Steffen Korbach, the company will showcase two supercars at this year’s auto show. Gemballa GTR 780 Evo-R will join the Avalanche on the show floor.

“Both cars are set to break some records”, he added. So stay tuned!