The Audi Q8 Concept was just unveiled at the 2017 Detroit Auto Show. It’s a range-topping SUV concept from Audi which spawn a production model in 2018. 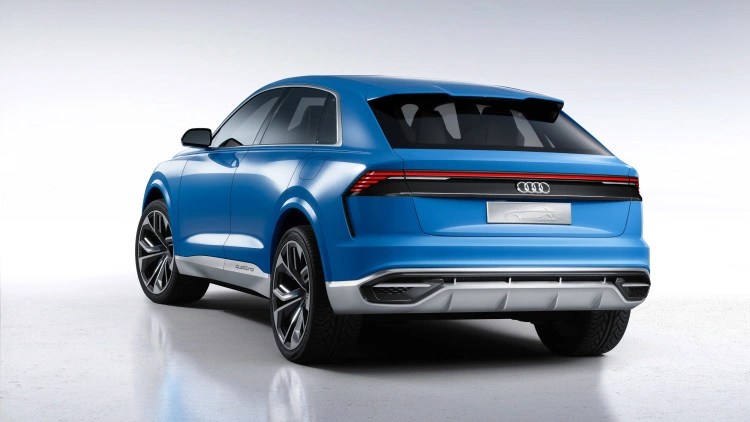 With the Q8 Concept, Audi has revealed its fresh new approach to styling. The imposing Audi grille has been restyled for a bold new look. It still features integrated headlamp clusters like the current generation of Audi cars. That said, the slats on grille are more pronounced giving the car a unique appearance.

The coupe-like roof line rakes heavily as we move towards the rear end. Here too, the designers have put in effort to give it a futuristic look that goes hand-in-hand with brand’s image. An unbroken, horizontal band of LED lights wrap around the tail gate. It’s angular and 3-dimensional; something we might see on future Audi models. 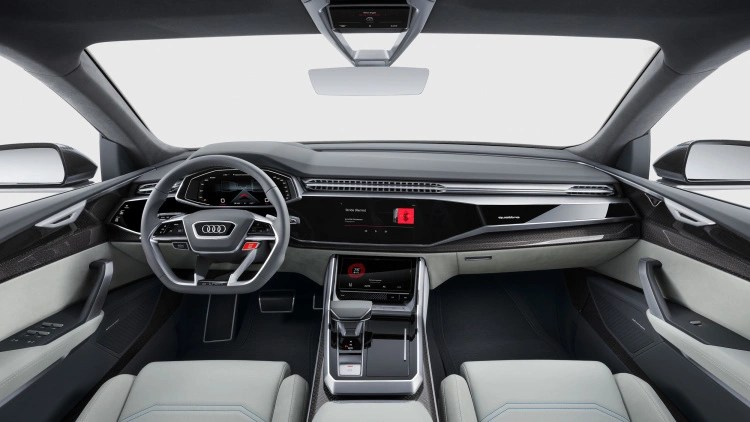 Inside, everything is clean and simple. The dashboard is basically a massive piece of glass with touchscreen capabilities and wrapped in the finest materials. Like in most Audis, the instrument cluster has been replaced with a configurable LCD display. The center console is a double-stack unit comprising of two touchscreen displays.

The Audi Q8 Concept on display at the Detroit Auto Show features a 4-seat layout. The production car is also expected to be available with this high-end option. 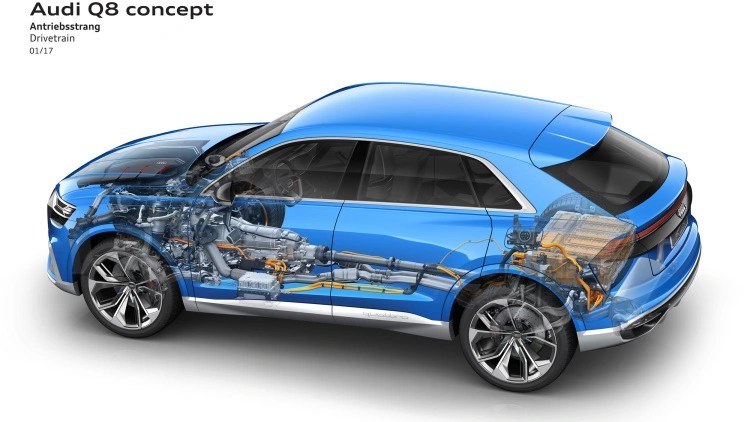 The Q8 Concept is powered by a plug-in hybrid system with a peak output of 442 hp and producing 516 lb-ft of torque. The system consists of a 3.0-liter turbocharged V6 which mated to an electric motor. An 8-speed automatic transmission sends power to all four wheels via Audi’s Quattro all-wheel drive system. A 17.9 kWh battery sits in the bowels of concept car which gives it 37 miles of full-electric range. Audi claims, the Q8 Concept accelerate from 0-60 mph in 5.4 sec

Audi has previewed an upcoming, range-topping concept SUV coupe. The Audi Q8 Concept will be showcased at the 2017 Detroit Motor Show next month.

The Audi Q8 concept is expected to arrive in 2018 in production form. That said, the recently released sketches give a good idea of what to expect. The Q8 will be based on the MLB EVO platform which also underpins the new Q7. Like the A8, it will be the top-of-the-line SUV in Audi’s line up and promises to offer a spacious and luxurious interior. 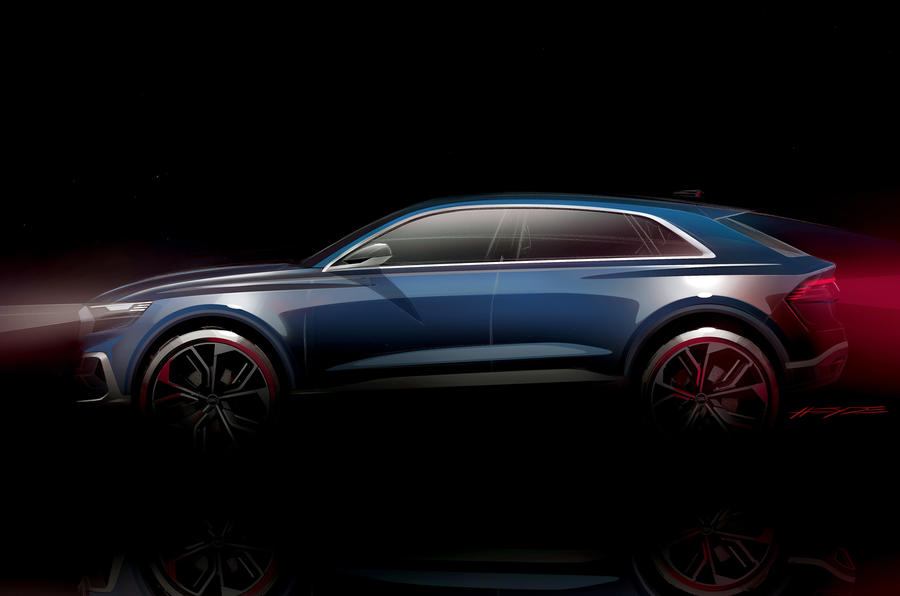 The Audi Q8 is expected to be at least 5 meters in length. The four-door coupe has a muscular and sporty stance, thanks to the imposing front end and coupe-like roofline. Short overhangs and a steeply raked rear windsheild add to the sporty character.

Speaking about the design philosophy behind the Q8, Audi design boss Marc Lichte said, “With the Audi Q8 concept, we have created a new spearhead within our Q model line. Its design strongly evokes sportiness and prestige. What’s more, we believe an important aspect of this show car is that it offers a spacious interior with four equally comfortable seats, even with the flat roofline.”

The e-tron badge on the sketches released by Audi sort of confirm that the new model will receive a hybrid powertrain. Also on offer will be a range-topping V8 followed by a V6 and an entry-level 3.0-liter TDI. Quattro all-wheel drive will be standard across the petrol as well as diesel range.

The Audi Q8 is expected to spur up a sibling rivalry with the Porsche Cayenne. Also in its cross-hairs will be the upcoming BMW X7 and the Mercedes-Benz GLS.