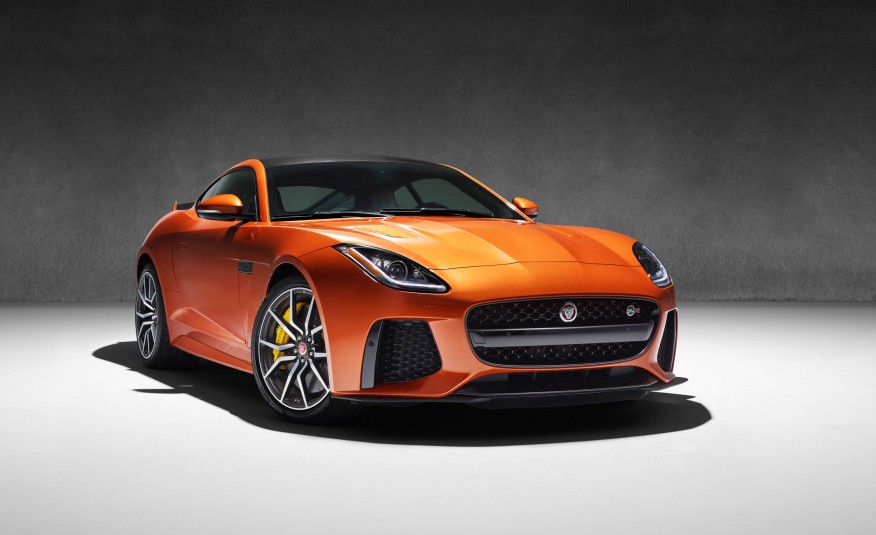 Jaguar stunned us all when it announced the F-Type SVR – the most potent Jaguar sports car on the market today. The Jaguar F-Type SVR will be unveiled at the 2016 Geneva Motor Show on March 1 and we are sure there are more people like us who are dying to see it in flesh.

Today, if you walk into a Jaguar showroom, you have the option of anything from a F-Type V6 to a thunderous V8 version. Both of these are an absolute joy to drive- even the V6 makes the right pops and bangs on the overrun. One thing that the F-Type never lacked was horsepower, but Jaguar engineers decided to add more to it anyway.

The Jaguar F-Type SVR is the result of tuning the 5.0-liter Supercharged V8 engine to a peak output of 575 hp and 516 lb-ft of torque. All of this is wrapped in a compact and rather good looking body with subtle changes give it that extra sporty appearance chief among which is the active rear spoiler, reworked front bumper with massive air ducts among others.

The Porsche 911 Turbo and Mercedes-AMG GT S are the Jag’s main rivals, however with 575 hp under the hood, the F-Type have got them covered. The 911 Turbo’s 3.8-liter flat-six twin-turbocharged motor makes 540 hp while the latter has just 503 hp. With such muscle, the Jaguar F-Type SVR cracks 200 mph with ease. The 8-speed automatic transmission and all-wheel drive also deserve some credit here.

Furthermore, Jaguar has just released the US pricing of the F-Type SVR. Priced at $126,945 for the coupe and $129,795 for the convertible, the Jaguar F-Type SVR undercuts the AMG GT S as well as the Porsche in terms of price. Supercar levels of performance for a fraction of the price!

Keep watching this space for the latest from the 2016 Geneva Motor Show.