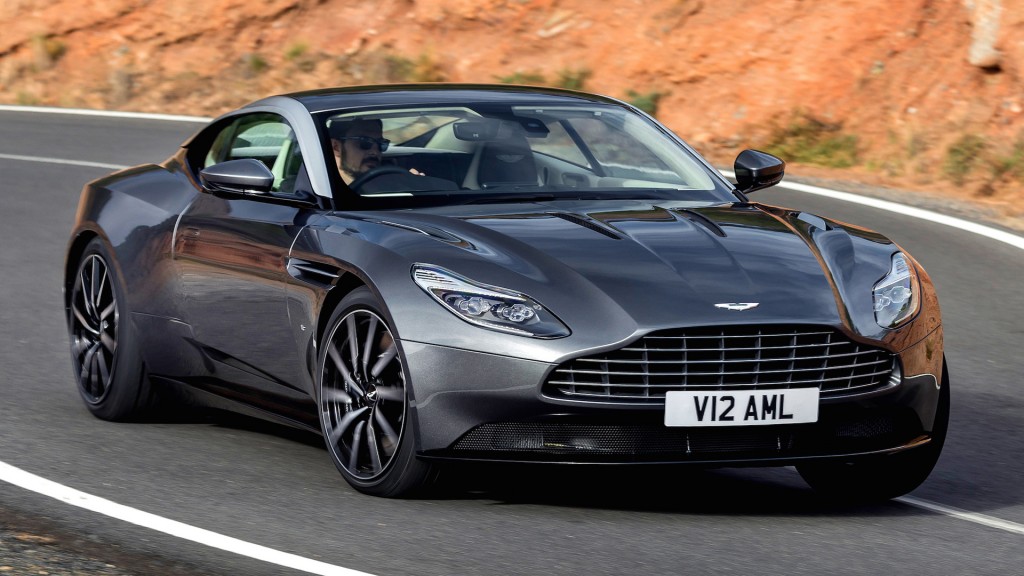 Aston Martin’s latest creation looks rather spectacular. It is called the Aston Martin DB11 and it has just been revealed at the 2016 Geneva Motor Show. The DB11 replaces the DB9 and is based on an all-new platform. It also features a brand-new V12 engine developed and built in-house at Aston Martin.

The revised styling is borrows cues from the previous Aston Martin sports cars and combines them with modern surfaces and styling elements that not only look brilliant but are also functional. Aston’s legendary grille stands proud up front with new wraparound headlights featuring LED technology. From the side the DB11 is follows similar lines as that of its predecessors- long hood, short overhangs and a low roof line in swept back coupe shape.

Aerodynamics plays a big part when it comes to designing cars, which is why there are vents on the front fenders which extract air from the wheel wells and reduce lift. The rear end has a pronounced lip with wrap around LED tail lights that follow the shape of the Aston Martin wing logo.

The interior of the new DB11 looks stylish and contemporary. The digital instrument cluster features a large analogue dial in the center. Brushed aluminium controls and steering mounted paddles look very premium. The center stack is well laid out with drive selection controls and engine start/stop button on console itself. Being an Aston Martin, the cabin is wrapped in the finest leather and looks very classy.

The new DB11 is based on a new lightweight platform. While the V12 engine is retained, it isn’t the old 6.0-liter unit we are familiar with. A new 5.2-liter V12 twin-turbocharged engine was specially developed for the new DB11. The engine makes 600 hp and 516 lb-ft of torque. An 8-speed automatic transmission helps accelerate it from 0-60 mph in 4.0 sec. The Aston Martin DB11 has a top speed of 200 mph.

Furthermore, Aston Martin will be offering a smaller 4.0-liter V8 engine on the DB11 which will be borrowed from Mercedes-AMG, of course. Meanwhile, the new DB11 is more economical and environmentally friendly thanks to turbocharging and systems like start/stop etc.

The all new Aston Martin DB11 will be available in the US in the latter part of the year priced at $211,995.

The 2017 Aston Martin DB11 will be revealed at the upcoming Geneva Motor Show. Aston Martin has released teaser videos of the DB11 in the past few weeks, however despite a slew of leaked images, the company is still trying to hold on to the official set till the last moment.

As we near the launch date, more and more images have surfaced over the internet and this latest installation of official images that you aren’t supposed to see yet are the best of the lot. Carscoops was able to grab these from an unknown source, but clearly, someone has leaked these from the official set.

Coming back to the car itself, we think the 2017 Aston Martin DB11 looks fantastic. We like the subtle edges that bring out the sporty character of the car all the while retaining the elegance of an Aston Martin. The expansive grille and vents on the sides and on the bonnet might be a hint to what lies underneath. A twin-turbo V12 is expected to debut on the new Aston Martin DB11. Turbochargers need cooling and that explains the large grille upfront.

In side profile, the DB11 looks like any modern Aston Martin. Long nose and short overhangs with a swept back coupe shape is characteristic of the brand. The shoulder line is more pronounced thanks to a line that runs along the side. New tail light cluster neatly wraps around an integrated boot spoiler which again seems like a sporty yet elegant solution to the complicated spoiler design seen on the Vanquish.

The new Aston Martin DB11 is expected to be lighter and much faster than its predecessor. Thanks to a new line up of engines, the new DB11 will even be more economical and environmentally friendly.

We haven’t seen the cabin of the new DB11 yet, but it won’t be long until Aston Martin releases more information of the new product. In the meantime keep watching this space for the latest from 2016 Geneva Motor Show.